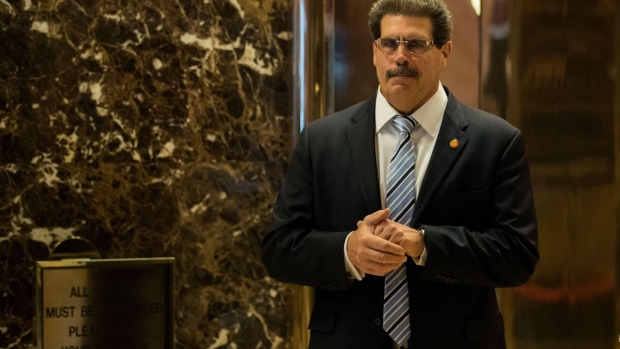 NEW YORK, NY - JANUARY 12: Matthew Calamari, an executive vice president with the Trump Organization, stands in the lobby at Trump Tower, January 12, 2017 in New York City. On Wednesday morning, Trump and his transition team are continuing the process of filling cabinet and other high level positions for the new administration. (Photo by Drew Angerer/Getty Images) , Getty Images

(Bloomberg) -- Trump Organization Chief Operating Officer Matthew Calamari won’t be charged by the Manhattan district attorney in a tax-fraud case in which the company and it longtime chief financial officer have already been indicted, Calamari’s lawyer said.

“I have been informed that there is no present intention to bring charges against Mr. Calamari,” Nicholas Gravante said Wednesday. “We believe that is the fair and just decision. What the future holds in terms of the district attorney’s continuing investigation is anyone’s guess.”

Vance in July charged former President Donald Trump’s family real estate company and its longtime CFO Allen Weisselberg with paying employees, including Weisselberg himself, in unreported perks like apartments and cars to avoid income taxes. Both the company and Weisselberg have pleaded not guilty.

The July indictment filed by Vance described other uncharged executives at the Trump Organization who received untaxed perks, and prosecutors continue to investigate whether Calamari was among them, people familiar with the case have said. Gravante represents both Calamari and his son, Matthew Jr., who is also a Trump employee.