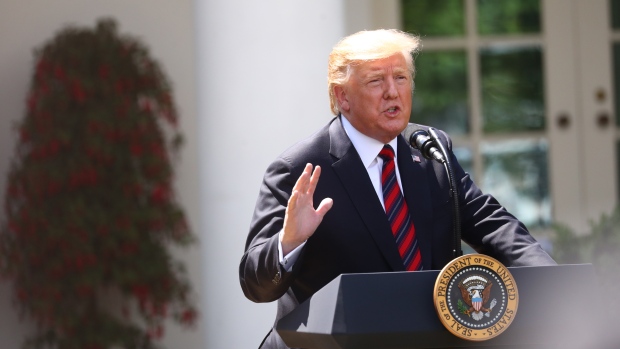 Birds sit on top of a section of the U.S.-Mexico border wall in Tijuana, Mexico, on Saturday, May 19, 2018. "We won't care about threats of a wall," National Regeneration Movement Presidential candidate Andres Manuel Lopez Obrador announced assuring another rally crowd in Zacatecas, one of the states that sends the most migrants to the U.S., that with him in power, they'll achieve equal footing with their neighbors to the north. , Bloomberg

(Bloomberg) -- President Donald Trump said “bad ‘hombres”’ apprehended at the border with Mexico will be detained and sent back to their home countries, a day after he released an immigration overhaul aimed at countering perceptions ahead of the 2020 elections that the GOP is anti-immigrant.

“All people that are illegally coming into the United States now will be removed from our Country at a later date as we build up our removal forces and as the laws are changed,” Trump said Friday on Twitter. “Please do not make yourselves too comfortable, you will be leaving soon!”

The plan was already showing signs it was headed for defeat, with some of Trump’s fellow Republicans throwing cold water on it even before it was officially unveiled.

Trump has repeatedly disparaged Mexican and Central American immigrants, starting with his 2016 campaign launch in which he accused Mexico of sending criminals and rapists to the U.S.

"We have some bad hombres here, and we’re going to get them out," Trump said in October 2016 during his final debate against Democratic presidential nominee Hillary Clinton.

To contact the reporter on this story: Terrence Dopp in Washington at tdopp@bloomberg.net

To contact the editors responsible for this story: Kasia Klimasinska at kklimasinska@bloomberg.net, Elizabeth Wasserman, Kathleen Hunter