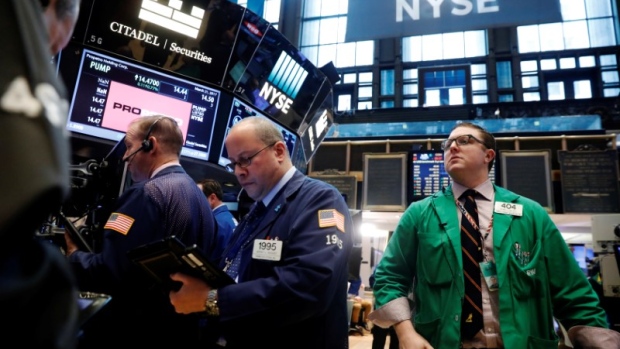 Stocks, the dollar and U.S. long-dated Treasury yields steadied after sharp drops on Monday, as investors hoped U.S. President Donald Trump will be able to bolster the economy despite a defeat over health-care reform.

Trump's failure to rally enough support from his own party, which controls both houses of the U.S. Congress, to repeal and replace Obamacare spurred a rush to safe-haven assets such as gold, the Japanese yen and the Swiss franc before nerves steadied.

“Donald Trump, labelled as a deal-maker, could not close the deal in the end,” wrote Gluskin Sheff Chief Economist David Rosenberg in a report to clients Monday. “He is not a closer after all, despite what the book said. Maybe he is in real estate, but not so far in politics (which is even a rougher game).”

A dip in risk appetite also dominated Asian and European stock markets, and MSCI's all-country world equity index was down 0.11 per cent. The index, which fell to a near two-week low after Wall Street stocks hit their lowest levels in about six weeks at the open, recovered ground as major U.S. stock indexes trimmed losses.

The Nasdaq Composite finished the day positive, while the Dow Jones Industrial Average  ended the day down 0.22 per cent, its eighth straight day of declines.

"The market is still cautiously optimistic that the Trump White House will be able to push through many of their pro-business policies, and I think a lot of people are hopeful the Trump rally can continue through at least the middle of the year," said Jake Dollarhide, chief executive officer of Longbow Asset Management in Tulsa, Oklahoma.

European shares were hit by losses among miners and banks. Europe's broad FTSEurofirst 300 index closed down 0.37 per cent at 1,479.05.

The U.S. dollar slipped, briefly falling to its lowest since November against a basket of currencies, as investors lost confidence in prospects for a U.S. fiscal spending boost under the Trump administration.

The dollar index had risen to a 14-year high near 104.00 in early January when expectations for inflation-boosting stimulus under the Trump presidency were at their peak. The index was down 0.42 per cent at 99.212.

U.S. long-dated Treasury yields fell to one-month lows, knocked by growing uncertainty about whether the Trump administration could deliver on its campaign promise to bolster the economy.

Oil, meanwhile, resumed its slide as investors remained uncertain whether producing nations would extend an OPEC-led output cut beyond the end of June in an effort to reduce a global glut of crude.