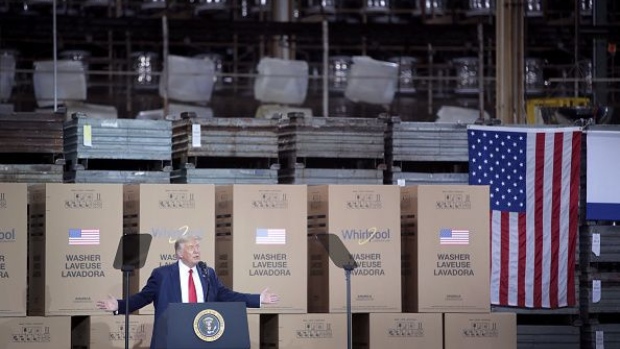 For weeks, America’s states have been counting on Congress to come through with hundreds of billions of dollars of aid to help them with a financial avalanche set off by the nation’s economic collapse.

Instead, with some Senate Republicans balking at another round of federal stimulus and negotiations in shambles, President Donald Trump added another burden. In an executive order on Saturday, he extended US$400 per week in additional unemployment benefits -- but is asking states to foot a quarter of the bill.

On the front lines of fighting the coronavirus since the Trump administration ceded much of the responsibility to the states, governments are being hit hard by the economic shutdowns ordered to contain it.

With more than 16 million people relying on unemployment benefits, nearly a dozen states -- including New York, California, and Texas -- have already exhausted their trust funds and borrowed almost US$20 billion from the U.S. Treasury to cover their share of the checks.

Sales taxes have tumbled by the most on record, and income taxes are eroding, too. All told, the pandemic may leave states with budget shortfalls of US$555 billion through 2022, according to the Center on Budget and Policy Priorities. State and local governments have already laid-off more than a million workers since March, far more than they let go in the years that followed the Great Recession and illustrating how severely their spending cuts may slow the economic recovery.

Democrats included an additional US$1 trillion in direct aid to states and municipalities in the stimulus bill that passed the U.S. House. The one proposed by Senate Republicans didn’t include any new funds for them, however, and Trump has sought to cast such aid as a giveaway to Democratic strongholds, even though the financial toll is being felt nationwide.

With talks at loggerheads, Trump resorted to executive action to replace some of the US$600-a-week federal unemployment benefit that lapsed. Yet it may be challenged in court as an unconstitutional encroachment on Congress’s power to allocate funds, and it’s also unclear how many states are in a position to opt in if a rival stimulus plan isn’t struck.

Eric Kim, head of state government ratings at Fitch Ratings, said the White House executive order allocating US$44 billion in federal disaster funding to cover those benefits implies that states electing to opt in would need to come up with US$14 billion to US$15 billion.

“25 per cent is a lot of money for states, particularly for something they have not been paying for at all right now,” he said in a statement Monday.

The White House said states could tap into the US$150 billion allocated for coronavirus relief in the March stimulus bill, saying more than US$80 billion of it is still available.

But that figure has been disputed by the National Governors Association, the National Conference of State Legislatures and five other bipartisan state and local government groups. They said it fails to recognize that the funds have already been earmarked for other expenses in their annual budgets, even if it hasn’t yet been spent.

Dan White, director of public sector research at Moody’s Analytics, said that he doesn’t see the proposal as feasible for cash-strapped states. He also said the federal government should be looking to help them financially, given that governments will be forced to either cut spending or raise taxes to balance their budgets -- the “opposite” of what would foster economic recovery.

“That’s going to counteract all the things the federal government is doing,” he said.

California’s Gavin Newsom called the order “absurd” on Twitter. In a press conference on Monday, Newsom estimated that California will have to pay US$700 million a week to comply with the order, a price it can’t afford. “The state does not have an identified resource of US$700 million per week that we haven’t already obliged,” he said. “There is no money sitting in the piggy bank from the Cares Act. It simply does not exist.”

New Jersey’s Phil Murphy was incredulous at a Trenton news conference Monday. “States are going broke and millions of Americans are unemployed, yet the solution calls for states to create a new program we can’t afford to begin with,” Murphy said.

New York’s Andrew Cuomo questioned the legality of Trump’s plan and said would cost the state US$4.2 billion between now and December. “We started with a US$30 billion hole and your solution is to cost me another US$4 billion? Thank you, that’s handing the drowning man an anchor,” Cuomo said.

Ohio has no plans to spend money Trump wants as a state match for extended unemployment insurance, a spokesman for Republican Governor Mike DeWine said Monday.

“We have set some money aside, a significant amount of money, for testing. Testing is going to be very, very important.” DeWine had said earlier. Meanwhile, he urged Congress to “get back in and negotiate.”