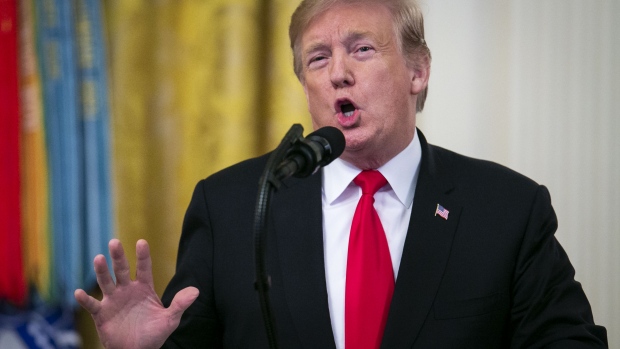 U.S. President Donald Trump speaks during a Medal of Honor ceremony in the East Room of the White House in Washington, D.C., U.S., on Wednesday, March 27, 2019. Trump awarded the Medal of Honor posthumously to Staff Sergeant Travis Atkins, the first he bestowed to an Iraq War veteran. , Bloomberg

President Donald Trump commemorated Earth Day with a message that included nods to “historic economic and job growth,” but made no mention of climate change.

“Environmental protection and economic prosperity go hand in hand,” Trump said in a statement issued Monday. “A strong market economy is essential to protecting our critical natural resources and fostering a legacy of conservation.”

Despite critics of his environmental record -- which includes a vow to pull the U.S. out of the Paris climate accord and dismantling Obama-era rules to slash greenhouse gas emissions from power plants -- Trump said America’s air and water quality ranks among the highest in the world.

“My administration is committed to being effective stewards of our environment while encouraging opportunities for American workers and their families,” Trump said.

A report issued late last year by several federal agencies said climate change posed a serious threat to the U.S., and is quickly getting worse. A separate report by the United Nations Intergovernmental Panel on Climate Change warned the world only had 12 years left to limit a climate catastrophe.

“The statement is really the antithesis of environmental protection,” said Andrew Dessler, a climate scientist at Texas A&M University.“They are not mentioning the gravest existential threat facing humanity.”