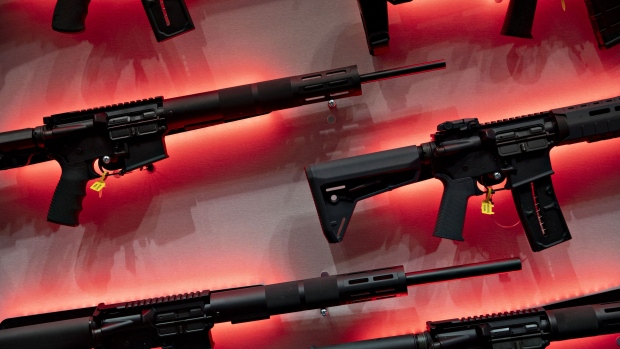 Rifles are displayed at the Franklin Armory Inc. booth during the National Rifle Association (NRA) annual meeting of members in Indianapolis, Indiana, U.S., on Saturday, April 27, 2019. Retired U.S. Marine Corps Lieutenant Colonel Oliver North has announced that he will not serve a second term as the president of the NRA amid inner turmoil in the gun-rights group. , Bloomberg

(Bloomberg) -- President Donald Trump is set to get briefed by aides Thursday on options for new gun control measures but it’s not yet clear how quickly he’ll decide, a White House official said.

The gun control debate in Congress, reignited after three deadly mass shootings in August, has been stalled while Republican lawmakers wait to get a clear direction from the president on whether he’ll support stricter background checks or only minor changes to the law.

“We’re going to take a look at a lot of different things and we will be reporting back in a fairly short period of time,” Trump told reporters at the White House Wednesday. “Some things will never happen,” he added, without elaborating.

The plans for Trump’s Thursday briefing emerged shortly after three senators spoke with him at length Wednesday about their proposal to close loopholes in federal background checks of gun purchasers. But Trump still hasn’t committed to a course of action. The president also has discussed taking smaller steps in talks with GOP congressional leaders.

Democratic Senator Joe Manchin of West Virginia said the conversation with Trump about extending background checks to all commercial sales was “very encouraging.” He along with Democrat Chris Murphy and Republican Pat Toomey said they were promised by the president he will tell them Thursday whether or not the White House will take a position on background checks that is opposed by the National Rifle Association.

“I think we will know soon, within the next day or two, whether the White House really is willing to put a substantive background checks expansion bill on the table,” said Murphy, of Connecticut.

The White House official, speaking on condition of anonymity, confirmed the meeting but sought to play down expectations for any decision being made and communicated to senators on Thursday.

Trump said he would talk to the senators again on Thursday and that “progress is being made.”

Lawmakers are calling on Trump to be clearer about his positions in a debate sparked by mass shootings last month in Texas and Ohio. Senate Majority Leader Mitch McConnell is refusing to advance any legislation without knowing whether the president would sign it.

Trump has publicly stated support for background checks, but also backpedaled by expressing doubt about whether they would be effective in curbing more violence.

Lawmakers in both parties have appeared to be moving toward a stalemate. Democrats are demanding a Senate vote on House-passed legislation that would expand background checks to all private sales. Many Republicans say that isn’t something they would support.

The House Judiciary Committee on Tuesday advanced three more gun control measures along party lines, including a bill that would ban high-capacity ammunition magazines that allow rapid firing without reloading. Those measures are unlikely to get through the Republican-controlled Senate, though they set down markers for the debate heading into the 2020 election campaign.

To contact the editors responsible for this story: Joe Sobczyk at jsobczyk@bloomberg.net, Laurie Asséo