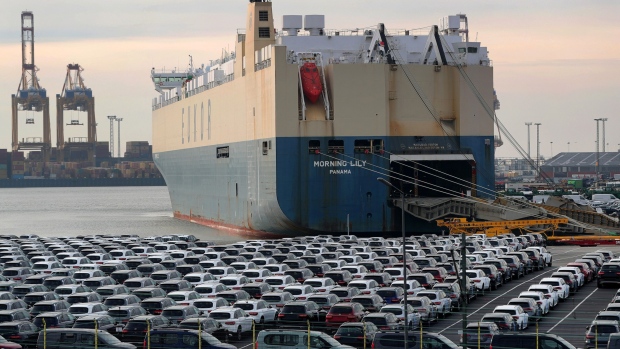 A new automobiles stand on the dockside ahead of export as roll-on/roll-off (RORO) cargo ship Morning Lily, operated by EUKOR Car Carriers Inc., sits docked at the BLG Logistics Group AG terminal at the Port of Bremerhaven in Bremerhaven, Germany, on Tuesday, , Bloomberg News

The Trump administration may delay a decision on whether to slap tariffs on European automobiles after an intense lobbying campaign by German carmakers highlighted plans to shift global production to American suppliers, people familiar with the White House deliberations said.

In May, President Donald Trump gave himself a deadline of mid-November to decide whether to impose levies on cars and auto parts from the European Union. The EU threatened to retaliate with tariffs on US$39 billion of American goods if the president carried out his threat.

Trump is expected to extend this week’s deadline again, according to people familiar with the plans, but the president has not yet made a final decision.

Following months of heavy lobbying, auto producers including Volkswagen AG and Daimler AG, who have plans to shift parts of their global production to suppliers in the U.S., made headway in convincing U.S. trade negotiators that their investments forestall the need for Trump to follow through on the car tariff threat, which could be as high as 25 per cent, according to the people, who asked not to be identified discussing private deliberations.

Commerce Secretary Wilbur Ross, in an interview with Bloomberg TV earlier this month, signaled that a postponement was likely.

“Our hope is that the negotiations we’ve been having with individual companies about their capital investment plans will bear enough fruit that it may not be necessary to put the 232 fully into effect, may not even be necessary to put it partly in effect,” said Ross, referring to the national-security investigation under Section 232 of a 1962 trade law.

European Commission President Jean-Claude Juncker backed up Ross’s assertion last week, telling German newspaper Suddeutsche Zeitung that Trump won’t follow through on his threat. A 25 per cent U.S. levy on foreign cars would add 10,000 euros (US$11,000) to the sticker price of EU vehicles imported into the country, according to the Brussels-based European Commission, the bloc’s executive arm.

U.S. ambassador Richard Grenell has acted as an intermediary over the past few months, speaking with German carmakers and telling them they need to create more value and more jobs in the U.S., the people said. Some of those companies have said they’re ready to switch parts of their Mexican production to U.S. suppliers and are reviewing their global production chains to see where other alterations could be made.

The move comes after German companies have already announced plans to expand their U.S. operations as sales projections in North America exceed those at home. Carmakers have been hinting for more than a year that they planned to shift key parts to the U.S., and the chief executive officers from Volkswagen, Daimler and BMW AG attended a meeting at the White House last November to discuss a new trade deal.

Volkswagen plans to invest US$800 million at its only U.S. vehicle factory located in Chattanooga, Tennessee, which will create at least 1,000 new jobs. Daimler, the maker of Mercedes-Benz luxury cars, has earmarked US$1 billion on investments to expand vehicle manufacturing at its Tuscaloosa factory in Alabama, which will add more than 600 jobs.

Some German carmakers have also touted their willingness to comply with the U.S.-Mexico-Canada Agreement, the people said, which was signed by Trump and his counterparts a year ago and is still awaiting approval from the U.S. Congress. The new accord would require that 40% of auto content come from high-wage plants, which would effectively force more production to the U.S.

The carmakers, however, don’t plan to move engine production to the U.S., according to the people.

“The new free trade agreement USMCA is currently still in ratification,” according to an emailed statement from BMW. “In accordance with the stipulations, the BMW Group will examine its plans.”

Last year, Trump infuriated European leaders by declaring American imports of steel and aluminum a security threat and imposing levies of 25% and 10%, respectively, on shipments from around the world, including the EU. That prompted the bloc to retaliate with tariffs on American goods such as Harley-Davidson Inc. motorcycles, Levi Strauss & Co. jeans and bourbon whiskey.

U.S. tariffs on European cars and auto parts would mark a significant escalation of transatlantic tensions because the value of EU automotive exports to the American market is about 10 times greater than that of the bloc’s steel and aluminum exports combined. As a result, European retaliatory duties would target a bigger amount of U.S. exports to Europe.

The Trump administration has reached separate agreements with other foreign auto-producing nations like Mexico, Canada and Japan to prevent the U.S. from imposing tariffs on their imported vehicles.