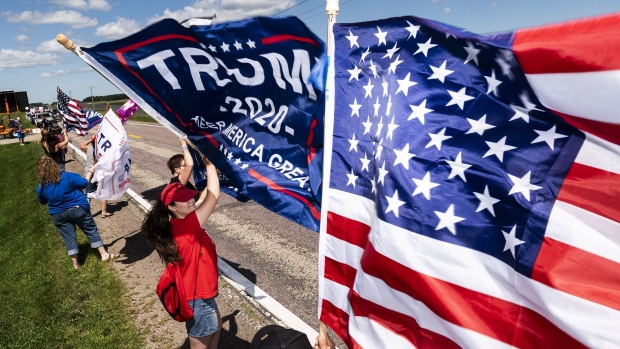 Trump won the White House in 2016, in part, on narrow victories in Michigan, Pennsylvania and Wisconsin. But he trails former Vice President Joe Biden in all three. Michigan and its 16 Electoral College votes, where Republicans lost congressional races and the governor’s mansion in 2018, looks particularly out of reach.

That’s got the president’s campaign working on an alternative path to re-election. His aides say one possibility is some combination of wins in Minnesota, New Hampshire, Maine and Nevada, states with a combined 24 Electoral College votes that Democrat Hillary Clinton won in 2016 by a thin margin. It’s a strategy to some extent forced on Trump; public disapproval of his handling of the coronavirus pandemic has weighed on his support nationwide, including in Michigan.

A Public Policy Polling survey of Michigan conducted Aug. 28-29 found that 56% of voters think the state’s Democratic governor, Gretchen Whitmer, has done a better job on the outbreak, compared to 39% who think Trump’s done better.

Minnesota has a progressive tradition that dates back generations through its Democratic-Farmer-Labor Party, which is affiliated with the U.S. Democratic Party and has produced an outsized number of national political figures.

The state has backed a Republican for president just three times since 1932, most recently when it voted for Richard Nixon in 1972. Walter Mondale, a Minnesotan, carried his home state and no other in Ronald Reagan’s 1984 re-election landslide.

Yet Trump’s campaign manager, Bill Stepien, said last week on a conference call with reporters that the state is “culturally shifting our way.” Barack Obama won Minnesota by 10 percentage points in 2008 and by 7.7 points in 2012; Clinton edged Trump by a slender 1.5 points.

Jason Miller, a senior adviser to Trump’s campaign, said on the call that the campaign had reserved $14 million in television ads to run in Minnesota through Nov. 3.

The spots now running in the state, and in adjacent western Wisconsin, portray Democrat Joe Biden as “taking a knee” when protests in Minneapolis turned violent. “Lawless criminals terrorize Minneapolis,” the ad says over images of burning buildings and a mask-wearing Biden.

“We’ve already laid down the marker that we’re going all-in on Minnesota. We think it’s a state that we can win,” Miller said.

A main reason: faltering public support for nationwide Black Lives Matter protests, which began after the May death of an unarmed Black man, George Floyd, at the hands of Minneapolis police.

Amy Koch, a Republican strategist in Minnesota, said people in the state were overwhelmingly “horrified” by what happened to Floyd, but that Trump’s law and order message may be resonating.

Some of the ensuing protests turned violent, with hundreds of Minneapolis buildings burned or otherwise damaged. Wisconsin is wrestling with its own bout of unrest after a police officer in Kenosha was seen on video last month shooting Jacob Blake, also Black, in the back seven times.

Trump assumed a hostile posture toward the protests and the Black Lives Matter movement, even as it was embraced by much of corporate America. He’s adopted “Law and Order” as a sort of campaign theme, promising Americans that if they elect Biden, the scenes of protests, riots and looting that began under Trump’s presidency will continue.

The longer the protests go on and the more aggressive and violent demonstrators have become, the more receptive voters grow to Trump’s position, according to two Republican officials, who asked for anonymity to discuss internal strategy.

“You betcha it helps the president,” said Ron Britton, chairman of the Republican Party in St. Louis County, in northeastern Minnesota between Lake Superior and the Canadian border. He said he’s given out his office’s entire inventory of as many as 800 Trump-Pence yard signs.

There’s evidence of this phenomenon in opinion polls. A Politico/Morning Consult poll published in late August found that voter support for Black Lives Matter had fallen 9 percentage points since June. Politico attributed the erosion at least in part to Trump’s attacks on the BLM movement, which he’s called “discriminatory.”

Trump has also tried to tie Biden to the protests and violence. “Law and order has increased my poll numbers a lot,” Trump said in a Fox News interview on Aug. 31.

But in fact, the same Politico survey found that voters trust Biden more on both public safety and race relations.

While Republican strategists within and outside Trump’s campaign consider Minnesota the likeliest Democratic state to flip, it’s an outside possibility for now. Public polls show Trump trailing Biden nationally and in all of the states his campaign considers new battlegrounds.

Biden has a 3.7 percentage point lead in Minnesota, according to a RealClearPolitics average of recent polls. Political pollsters say they’ve adjusted their surveys this year to better account for the preferences of non-college-educated white voters -- a crucial constituency undercounted in many 2016 polls before helping Trump take the White House.

Trump’s close run against Clinton in 2016 came despite mostly ignoring the North Star State during the campaign, a decision he’s since lamented.

“I almost won last time,” Trump said in an Aug. 17 speech in Mankato, Minnesota. “I went to Michigan, I had a choice. I shouldn’t tell you this, but we won Michigan. One more speech, I would’ve won. I was so close.”

Some Minnesota Democrats are skeptical.

In Olmsted County, where Clinton pipped Trump by 600 votes in 2016, or 45.7% to 45.0%, Stephanie Podulke, a county commissioner, said she’s seen few Trump signs. She said she knows other Democrats who didn’t vote in the last election because they didn’t like Clinton, and now regret the decision.

“That’s not going to be the case this year. People that didn’t vote are going to,” she said.

Marv Bodie, another county commissioner, said he’s a moderate who leans Democrat. His hunch, he says, is that the state stays Democratic, but “it’s really a crapshoot.”