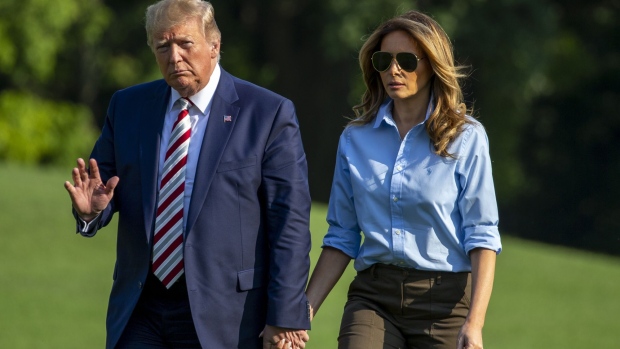 U.S. President Donald Trump waves while walking with First lady Melania Trump on the South Lawn of the White House after arriving on Marine One in Washington, D.C., U.S., on Sunday, Aug. 4, 2019. In his first verbal response to the two mass shootings over the weekend, which left about 30 people dead, Trump said that "hate has no place" in this country. Photographer: Tasos Katopodis/Bloomberg , Bloomberg

(Bloomberg) -- The shooting deaths of 29 people over the weekend raised pressure on Donald Trump both to address rampant gun violence in the U.S. and reconsider his own divisive rhetoric about immigrants and minorities.

Trump, though, had little to offer to a grieving nation on Sunday. After spending the day ensconced at his golf resort in Bedminster, New Jersey -- a spokesman would not say whether he played -- he told reporters before returning to Washington that he’d say more about the attacks on Monday.

“Perhaps more has to be done,” he said with his wife, Melania Trump, at his side. He’s scheduled to deliver remarks at 10 a.m. in Washington.

The attacks in El Paso and Dayton were the latest mass shootings in the only developed country that routinely experiences them. One of the assailants appeared to have distinct political motives: a manifesto linked to the suspect in El Paso, but not yet confirmed by authorities as authentic, complained of a “Hispanic invasion of Texas” and “fake news,” and expressed fear that Texas could flip to Democrats in the 2020 election.

That attack killed 20, including seven Mexican citizens, and it is being investigated as domestic terrorism. Mexico’s Foreign Minister Marcelo Ebrard called the shooting an act of terrorism and said he would travel to El Paso on Monday.

Several Democrats pointed to Trump, saying he directly or indirectly encourages such violence. Only four days before the El Paso attack, the National Cathedral in Washington rebuked the president for verbal attacks on minority lawmakers and the cities they represent that have been called racist. “Violent words lead to violent actions,” the cathedral’s religious leaders said in their unusual statement.

“He is a racist, and he stokes racism in this country,” Democratic presidential candidate Beto O’Rourke, an El Paso native, said of Trump after the shooting at a Walmart just a few miles from the Mexican border. “And it does not just offend our sensibilities; it fundamentally changes the character of this country and it leads to violence.”

Former Vice President Joe Biden, who is leading the race to challenge Trump in 2020, abandoned his stump speech at a San Diego fundraiser late Sunday to lace into the president.

“When you give a safe harbor to hate from the Oval Office, it gives license to extremism all across the country. I’m not saying he’s personally responsible but I’m saying he’s a significant contributor to what’s going on,” Biden said.

Trump, though, said both attackers were mentally ill, a familiar refrain for Republicans who seek to avoid discussion of gun control. “If you look at both of these cases, this is mental illness,” he said in New Jersey. “These are really people that are very, very seriously mentally ill.”

Gun-rights groups regularly cast mass shootings as unpredictable acts by sick individuals and a failure of the U.S. health-care system, rather than the result of the country’s relatively weak regulation of gun ownership. “Framing this as just a mental illness problem is a gun industry trope. Period,” Senator Chris Murphy of Connecticut said on Twitter.

The U.S. has now had 251 mass-shootings in 2019, defined as incidents in which four or more people are shot, according to the Gun Violence Archive, a not-for-profit group. That’s an average of more than one each day.

The National Rifle Association said in a statement on Sunday that it would “not participate in the politicizing of these tragedies” but “will work in good faith to pursue real solutions.”

The odds of Congress being moved to act are low. Lawmakers are in their month-long August recess, and by the time they return to Washington, the El Paso and Dayton headlines are sure to have faded.

No meaningful gun restrictions were passed after the 2012 shooting at Sandy Hook Elementary School in Connecticut that killed 26 people, including 20 young children -- an attack so horrifying it was seen as a potential turning point.

After a 2017 Las Vegas massacre that killed 58 people, Trump used his executive authority to ban bump stocks, a device used in the attack that allows semi-automatic weapons to fire more rapidly. “We have done much more than most administrations,” Trump said on Sunday.

Senator Sherrod Brown, an Ohio Democrat, called on Republican Senate Majority leader Mitch McConnell to recall lawmakers from their summer break to vote on legislation the Democratic-controlled House has passed that would expand background checks for gun purchases.

“It could finally put the country on the right path on gun violence,” he told CBS’s “Face the Nation.”

McConnell fractured his shoulder in a fall over the weekend, and will be working from home in Kentucky for now.

Other presidential candidates and Democratic lawmakers roundly demanded that Congress abandon its recess to work on gun legislation and said the attacks should be considered terrorism. The idea that the U.S. is threatened by “white nationalist terrorism” also began to gain purchase in parts of the Republican Party after the El Paso attack.

But unlike Democrats, Republicans stopped short of saddling Trump with any of the blame.

The El Paso manifesto echoed Trump’s own language. The document references an Hispanic “invasion,” railed against “traitors,” and suggested of immigrants, “send them back.” Even “fake news,” an insult the president has used against the media dozens of times, was mentioned.

Trump has repeatedly stoked racial divisions in the U.S. before and since becoming president. He called Mexican migrants rapists, sought to ban Muslims from traveling to the U.S. and said there were “good people” on both sides of a violent Charlottesville clash between white supremacists and counter-protesters.

He recently urged four minority congresswomen, all U.S. citizens, to go back where they came from, a well-worn racist trope. That incited a Trump rally crowd in North Carolina to chant “send her back” about Representative Ilhan Omar, an American citizen who was born in Somalia.

As recently as June, Trump described migration through the southern border as an “invasion.” He spent a recent weekend attacking Elijah Cummings, a prominent black Democratic lawmaker who chairs the House Oversight and Reform committee. and described majority-black Baltimore, in Cummings’s district, as a “disgusting, rat and rodent infested mess.”

A few Republicans on Sunday described the El Paso attack as terrorism, and the Department of Justice said it was treating the case as “domestic terrorism.”

Outgoing Representative Will Hurd -- the lone black Republican in the House, whose district stretches along much of the Texas border with Mexico -- noted he had voted for a bill expanding background checks for gun purchases, which was passed by the Democratic-led House but has stalled in the Republican-controlled Senate.

“This is an act of terrorism,” Hurd said on CBS’s “Face the Nation.” “This is based on race and hatred.”

But he and Senator Tim Scott, the only black Republican in his chamber, downplayed Trump’s role and criticized O’Rourke’s remarks.

“Divisive rhetoric is not the way to go,” Hurd said.

“We need to take a step back from politicizing every event,” Scott said.

And Acting White House Chief of Staff Mick Mulvaney disavowed presidential responsibility for the shootings, noting that the document alleged to be the work of the El Paso shooter made a point of saying his anti-immigrant views predated Trump.

“What can you do?” Mulvaney asked. “You have to try and fix the society, right? You have to figure out why people now take it upon themselves to take guns into large groups of people.”

To contact the editors responsible for this story: Alex Wayne at awayne3@bloomberg.net, Ros Krasny