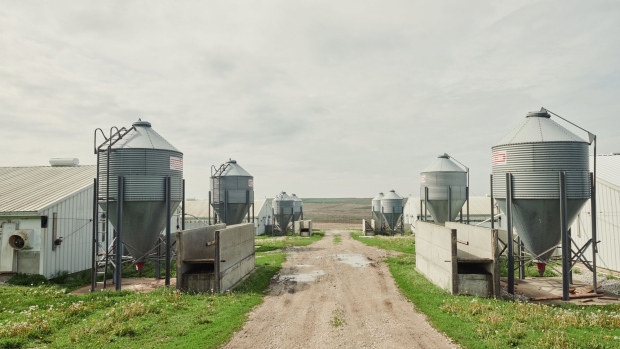 Storage silos stand on a hog farm near Le Mars, Iowa, U.S., on Wednesday, May 27, 2020. Wholesale pork prices have increased 51 percent, the USDA reported. Surging wholesale meat prices are starting to push up prices at grocery stores, while the risk of shortages is growing at a time that shoppers continue to fill their pantries and freezers with stay-at-home staples. Photographer: Dan Brouillette/Bloomberg , Bloomberg

President Donald Trump’s billions in bailout payments for farmers probably pushed the U.S. past international treaty limits on subsidies, potentially inviting retaliation from trading partners, according to an advocacy group.

The Environmental Working Group, a critic of farm subsidies, calculated that the aid pushed “trade distorting” subsidies covered under a 1994 international agreement to US$34 billion in 2019, far above the pact’s US$19.1 billion cap for the U.S. The analysis projected the U.S. probably will exceed the cap again in 2020.

“The administration will ensure that all payments are consistent with the WTO Agreement on Agriculture, including obligations capping trade distorting domestic support,” a USDA spokesperson said in an emailed statement.

Several independent analysts agreed that the U.S. is likely in violation, though any official action by the WTO might not come for years, if at all. Still, other nations could respond with retaliatory measures on U.S. products or escalate their own farm subsidies, cheapening their exports and lowering global prices.

Breaching the international limits “cuts the legs out” from long-standing U.S. efforts to control other countries’ subsidies of agricultural production, said Jeffrey Schott, a former U.S. Treasury official and trade negotiator in Republican and Democratic administrations who is now a senior fellow at the Peterson Institute for International Economics.

“Agriculture subsidies have been a big problem,” Schott said. “We care about it because we have competitive farmers. But if other countries subsidize their farmers that could offset the competitive advantage our farmers have. And that happens from time to time.”

Any sanction through the WTO, long a target of Trump’s complaints about trade, would probably take years, long after a presidential election campaign in which the president is depending on overwhelming support from farmers who benefit from the recent flood of government aid money.

But tension over the subsidy payments could spill over into a tit-for-tat trade war between the U.S. and the EU. The EU has pledged to unilaterally retaliate if the U.S. blocks WTO action on any trade dispute by gaming an appeals process the Trump administration has rendered inoperable.

Trump authorized a US$28 billion trade bailout over two years for farmers hit by his tariff war with China, more than twice the ultimate cost of the controversial auto industry bailout under former Presidents George W. Bush and Barack Obama. The administration also announced a US$19 billion coronavirus bailout from money Congress allocated in its relief package and soon will have access to an additional US$14 billion in borrowing power lawmakers authorized for the purpose. Farm groups are jockeying for additional aid in the next pandemic relief bill.

As a result, the WTO might count a total lower than the Environmental Working Group’s calculation -- probably between US$30 billion and US$34 billion for 2019, which still far exceeds the treaty limit, former U.S. Agriculture Department chief economist, Joe Glauber said.

The U.S. probably won’t submit its report on the 2019 payments until 2021, and it may argue that the payments don’t run afoul of the international agreement. It would then be up to another country to submit a complaint demonstrating harm to its producers, opening a sometimes-lengthy dispute process.

“People yell at you, but there isn’t anything automatic that happens when you go over the limit,” said William Reinsch, a former Commerce Department official in the Clinton administration who is now a senior adviser at the Center for Strategic and International Studies. “Someone could initiate a WTO case. More likely, they’ll give their farmers more money and, if we complain, they’ll say, ‘Well you did it.’”

The U.S. hasn’t previously exceeded the limits on overall farm subsidies since they were established in 1994. But Brazil won a WTO case in 2004 against the U.S. for excessive cotton subsidies and threatened retaliatory measures including actions against U.S. holders of intellectual property rights such as pharmaceutical and entertainment companies. The dispute was ultimately resolved in 2014 after the U.S. agreed to pay financial compensation to Brazilian cotton farmers.

Glauber, the former USDA economist, said whether other countries pursue retaliation this time will probably depend on whether the extra aid continues in future years.