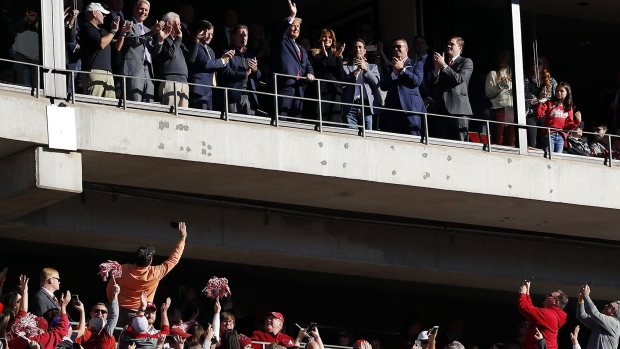 (Bloomberg) -- President Donald Trump found refuge at the University of Alabama as football fans showered him with cheers during a highly anticipated showdown with Louisiana State University, a match-up of the nation’s top two college teams.

Two weeks ago, Trump was overwhelmingly booed at Nationals Park in Washington during Game 5 of the World Series. He faced a mix of cheers and boos last weekend at a mixed martial arts event at Madison Square Garden in New York.

His stadium experience at Tuscaloosa in the Deep South was different. Sitting in a skybox above field level on Saturday, the president waved and clapped as fans turned to cheer him and first lady Melania Trump when their images flashed on the big screen at Bryant-Denny Stadium early in the game. One fan held up a T-shirt that read “Trump the Tigers,” a reference to LSU’s mascot.

As Trump drove to the stadium, a woman standing along the motorcade route wore an oversized “Make America Great Again” hat holding a sign that read “Make ‘Bama #1 Again.” LSU is No. 1.

There was little sign of protest inside the stadium, save for a smattering of boos during Trump’s introduction. One woman in Alabama apparel approached reporters before kick off and said, “Y’all report that some of us are here to boo in person.” A balloon depicting Trump as a diaper-wearing baby was flown in Tuscaloosa, but was not visible from the president’s motorcade.

Trump watched the game with a group that included eight Republican lawmakers. He was joined by Senate Appropriations Committee Chairman Richard Shelby of Alabama, and Alabama Representative Bradley Byrne, who is running for the state’s GOP Senate nomination next year.

Notably absent was Jeff Sessions, Trump’s former attorney general, who is vying for his former Senate seat held by Democrat Doug Jones. Trump has harbored a grudge against Sessions for recusing himself in 2017 from the Russia investigation, which the president blamed for the appointment of Robert Mueller as special counsel.

To contact the reporter on this story: Jordan Fabian in Tuscaloosa, Alabama at jfabian6@bloomberg.net

To contact the editors responsible for this story: Alex Wayne at awayne3@bloomberg.net, Steve Geimann, Tony Czuczka