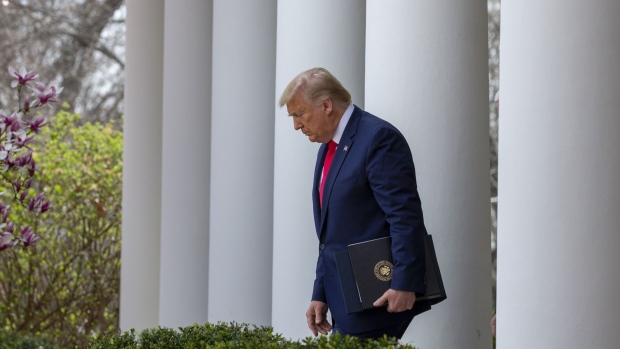 Leaders of the Group of Seven are united on the need for economic stimulus to combat the coronavirus pandemic and told Japanese Prime Minister Shinzo Abe that they hope he can proceed with the Summer Olympics, White House economic adviser Larry Kudlow said.

“They all want to do whatever it takes,” Kudlow said Monday in an interview on Fox Business Network following a call President Donald Trump hosted with the other leaders on Monday.

Trump held the emergency video conference call with the leaders of Canada, France, Germany, Italy, Japan and the U.K. from the Situation Room in the West Wing, as the world’s most powerful nations sought to curb an outbreak that’s left thousands dead and ground economies across the world to a halt.

The S&P 500 was down about 7 per cent at 12:15 p.m. in Washington following another suspension of trading, despite the U.S. Federal Reserve cutting its main interest rate to near zero and announcing plans for US$700 billion in bond purchases. The coronavirus outbreak has caused wild volatility in markets, with stocks showing their first back-to-back 9 per cent swings since the Great Depression to close last week.

European leaders including Germany’s Angela Merkel and France’s Emmanuel Macron were hopeful the video conference would result in the announcement of coordinated action that could calm investors. And the French and German leaders sought greater coordination with the U.S. after being caught off-guard by Trump’s announcement last Wednesday that most European citizens would be denied entry to the country in a bid to thwart the spread of the virus.

Japan’s Abe told the leaders that he was hopeful his country would be able to proceed with the 2020 Summer Olympics, and Trump wished him luck and said he has the support of the rest of the G7, Kudlow said.

The U.S. side was expected to raise concerns over a late-night cyber attack on the Department of Health and Human Services, which is coordinating the country’s response to the coronavirus outbreak. Administration officials believe a hostile state actor was responsible for the attack, but do not think it succeeded in slowing down department systems or stealing data.

The White House was also seeking to combat a disinformation campaign administration officials blame on an unidentified foreign state, amid the spread of text message rumors that the U.S. would implement a national quarantine. White House officials said the rumors were untrue.