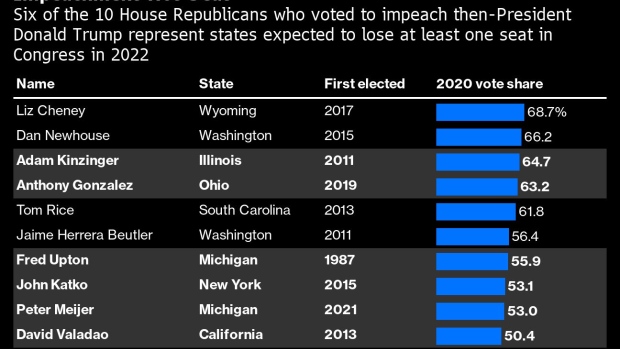 U.S. President Donald Trump speaks to members of the media before boarding Marine One on the South Lawn of the White House in Washington, D.C., U.S., on Wednesday, Jan. 20, 2021. Trump departs Washington with Americans more politically divided and more likely to be out of work than when he arrived, while awaiting trial for his second impeachment - an ignominious end to one of the most turbulent presidencies in American history. , Bloomberg

(Bloomberg) -- Former President Donald Trump is vowing to take revenge on the Republicans who voted for his impeachment by backing candidates willing to take them on in a primary. But the new congressional map based on the 2020 Census may do some of the work for him.

Six of the 10 House Republicans who voted to impeach Trump are from states expected to lose congressional seats when legislatures redraw their districts based on state-level population data from the Census Bureau coming in April. And at least three live so close to their district boundary that it’s possible they’ll be moved to another district, potentially forcing them to run against another incumbent.

The game of congressional musical chairs could complicate an already extraordinary mid-term election in 2022 that will test Trump’s post-presidency power to shape the Republican Party, and President Joe Biden’s ability to govern with the razor-thin congressional majority he has now.

With the 10-year redistricting cycle resetting the map, some Republicans face a triple threat: A redistricting process that could force them into another seat, a primary challenge from a Trump loyalist -- and then a general election against a Democrat in a newly redrawn district that may be balanced in their opponent’s favor.

Republicans need to flip only five seats in 2022 to regain the majority in the U.S. House of Representatives. History puts the odds in their favor since the party that doesn’t hold the White House historically gains an average of 26 seats in midterm elections for the 435-member House.

Minority Leader Kevin McCarthy and others have been trying -- so far without success -- to talk Trump out of challenging the GOP incumbents who voted for his impeachment, potentially allowing them to win their primaries relatively unencumbered, which will give them an edge in the general election.

Those include Representative Adam Kinzinger, a prominent Trump critic who represents an Illinois district that wraps around the outer Chicago suburbs. Kinzinger lives in the corner of the 16th District, a few miles south of the line that separates his district from that of Democratic Representative Bobby Rush.

Now, Kinzinger is one of Trump’s top priorities for defeat. But political adviser Jason Miller said Trump would be satisfied if redistricting removes him from Congress without a fight.

“The districts of any Republicans who voted for impeachment are easy ones to cut,” he said. “Quite frankly, between their newfound unpopularity with Republican primary voters and based on what could happen with redistricting, I think a large number of these House members will be forced into retirement or looking for another job.”

Miller said the new maps will factor into decisions on how and when to endorse primary opponents.

House members aren’t required to live inside their districts, but most do to avoid accusations of “carpetbagging.”

Wherever Kinzinger goes, he’ll likely be pursued by at least one challenger. Catalina Lauf, a 27-year-old Latina entrepreneur, worked at the U.S. Minority Business Development Agency under Trump and was featured in a prime-time segment at the Republican National Convention last year.

“If we’re going to have people in our own party going against what we stand for, how is Adam any different than a Democrat?” Lauf said in a phone interview.

While Trump has not endorsed Lauf yet, she “has looked impressive early on, so we’re watching her candidacy very closely,” Miller said.

So far, the only challenger to get that coveted Trump seal of approval is Max Miller, a former Trump campaign and White House aide who’s challenging GOP Representative Anthony Gonzalez.

Gonzalez, a former Ohio State football player in his second term, voted to impeach Trump for his role in inciting the Jan. 6 insurrection at the U.S. Capitol and failing to respond quickly once it began. Soon after, Miller moved into the district and announced he was running, saying Gonzalez betrayed the “America First” agenda.

Miller’s announcement said he was running for Ohio’s 16th congressional district, but the state has seen slow population growth in the past decade and may be reduced to only 15 districts.

The current district was created 10 years ago by a Republican-controlled legislature intent on drawing as many GOP districts as possible. It carved the district out of a Democratic part of the state by connecting Cleveland’s white-collar western suburbs to more rural areas further south via a 2,400-foot-wide connection along the Ohio Turnpike.

Gonzalez lives nine houses away from the border of a Democratic district now held by Representative Marcy Kaptur, who’s held her seat since 1987.

Chris Glassburn, a redistricting expert for Ohio Democrats, said Gonzalez’s existing district may be untenable under a new state constitutional amendment that encourages bipartisan map-making and, if that breaks down, requires Republicans to follow city and county lines as much as possible.

That scenario would likely merge Gonzalez’s district with that of GOP Representative Dave Joyce, who represents Cleveland’s eastern suburbs.

“Unless you have a bipartisan gerrymander that breaks all of this, you’re going to have Joyce and Gonzalez in one district,” Glassburn said.

In Michigan, two Republicans who supported impeachment are from neighboring districts. Fred Upton has represented southwestern Michigan’s Sixth District since 1987. Next door is Representative Peter Meijer, who took office this year.

The boundaries of Upton’s district are fixed by the Indiana border to the south, and Lake Michigan to the west. Often, it’s rural districts in the middle of a state, like Meijer’s, that can change the most because map-makers need to shift territory during re-balancing.

“Meijer’s district makes no sense,” said Jon Eguia, who studies partisanship in redistricting at Michigan State University. “It doesn’t have its own identify as a district. What it looked like 20 years ago or 10 years ago has nothing to do with how it will look next year.”

Meijer lives in Grand Rapids in his 3rd Congressional District, but surrounded on three sides by a district held by Republican Bill Huizenga. Meijer’s home is 1.5 miles from the district line, so he could be moved into that district.

Tom Norton, a pro-Trump Republican who says he’s from the “American” wing of the party, has already vowed to challenge Meijer in 2022 over the impeachment vote and hopes to get Trump’s endorsement. But he said if Meijer ends up in a district with Huizenga he’ll bow out.

Adding to the unpredictability, Michigan has a new citizen-led redistricting commission that can’t take incumbency into account. In states where legislatures draw the lines, back-room bipartisan agreements often avoid pitting two incumbent congressmen against each other.

Newly-drawn congressional districts blunt the power of incumbency because voters in the new district don’t know them as well. Richard Born, who studies redistricting at Vassar College, said that vulnerability tends to draw out challengers who see an opportunity to run in a new district, even if it means challenging someone of their own party.

For incumbents, moving a few miles to take up residence in a new district is the easy part, he said. Introducing themselves to new voters is much harder.

“The more new constituents they have, the more likely the incumbent is going to lose in a primary,” Born said. “That’s the real danger. These people are in greater danger because Trump is endorsing an opponent than they are because of redistricting itself.”