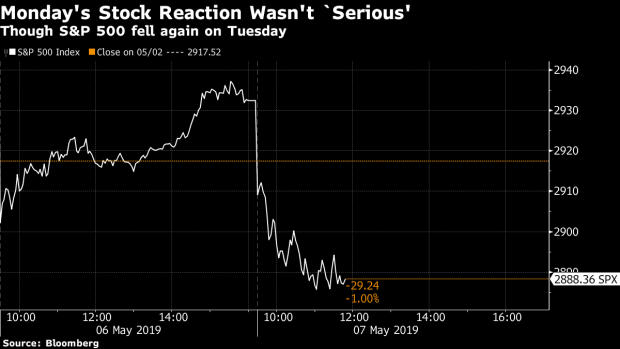 (Bloomberg) -- President Trump may have watched markets on Monday and concluded it’s fine to proceed with more tariffs, according to AGF Investment’s Greg Valliere.

“The lack of a serious market selloff sent a signal to Trump that he can impose more tariffs,” Valliere wrote in a note, “not just on Friday against China but possibly against European autos, while maintaining tariffs against steel and aluminum imports from Canada and elsewhere.”

Valliere added that Trump’s Chinese tariffs have broad support, noting that “even Chuck Schumer urged Trump to hang tough, and many other Democrats agree; there’s a widespread consensus in Washington that China cheats.”

The S&P 500 index dropped as much as 1.6 percent on Tuesday, the largest slide since March 22, as investors remained on edge over Trump’s threat to increase tariffs on billions of dollars of imports from China, and after the European Commission cut its growth forecasts for the euro area and slashed its projection for Germany. The decline brought the index’s two-day intraday slide to as much as 2.1 percent, the biggest two-day decline since March 25.

“It now appears that the impasse is over more critical and numerous issues than previously thought, and the delay in talks this week leaves little time for resolution before 12:01 am Friday,” Morgan Stanley chief U.S. policy strategist Michael Zezas wrote in a note. “A muted market reaction likely didn’t motivate the U.S. to modify its stance ahead of the talks.”

Another policy analyst is maintaining his optimism a U.S.-China pact is still in the works. “The odds favor the U.S. and China reaching a deal in the coming weeks,” Compass Point’s Isaac Boltansky wrote in a note Tuesday.

That’s because China’s bargaining position has strengthened in the past year as its economy has stabilized, a shift that’s “predicated at least in part on economic stimulus and optimism regarding a potential trade deal,” he said. Boltansky also pointed to Treasury Secretary Steven Mnuchin’s statement that roughly 90 percent of the negotiations had been finalized, and flagged awareness that intensifying trade tensions would hurt supply chains, the economy and consumers.

“China’s subdued response to the tariff announcement demonstrates a willingness to continue the negotiations that should be viewed as a positive,” he added.

To contact the editors responsible for this story: Catherine Larkin at clarkin4@bloomberg.net, Scott Schnipper