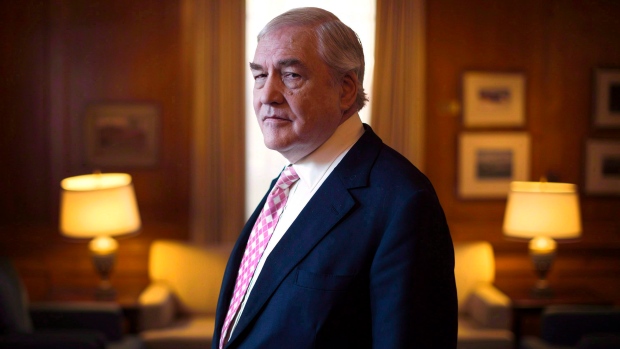 Former media baron Conrad Black is shown at the University Club in Toronto on Tuesday, November 11, 2014. , THE CANADIAN PRESS/Darren Calabrese

Black, 74, who served three and a half years in prison after a federal jury found that he illegally diverted money that belonged to stockholders to himself, founded a company that at one time owned some of the world’s most best-known newspapers, including the Chicago Sun-Times, The Daily Telegraph and the Jerusalem Post.

Last year, he published a book called “Donald J. Trump: A President Like No Other.”

In a column in Canada’s National Post, Black said Trump himself gave him the good news in a telephone call. “When my assistant said there was a call from the White House, I picked up, said ‘Hello’ and started to ask if this was a prank, (suspecting my friends in the British tabloid media),” Black wrote.

He said that Trump got on the line saying, “Is that the great Lord Black?” Black became a member of the British House of Lords in 2001.

Prosecutors said Black and other executives re-characterized bonus payments stemming the sale of community newspapers without the approval of the company’s board in order to avoid Canadian taxes. The government argued that in doing so, the individuals breached the duty of “honest services” owed to the company and its shareholders.

But two of his three fraud convictions were voided after the U.S. Supreme Court ruled that the “honest services” law was unconstitutionally vague. Black has lived in his native Canada since being deported from the U.S. following his May 2012 release from a Florida prison.

The White House said that Black’s case “has attracted broad support from many high-profile individuals who have vigorously vouched for his exceptional character,” including former Secretary of State Henry Kissinger and the singer and composer Elton John. The statement from press secretary Sarah Huckabee Sanders also credited Black’s “tremendous contributions to business, as well as to political and historical thought.”

“In light of these facts, Mr. Black is entirely deserving of this grant of executive clemency,” she said.

Black and Trump knew each other before the president’s election, with Trump attending a 2000 birthday party for Black’s wife, Barbara Amiel.

Black, who has also written a biography of President Franklin Delano Roosevelt, had praised Trump in recent years. In an interview last year with Bloomberg Television, he said Trump would be remembered historically as a “good president” and occasionally acted outrageously so adversaries would underestimate him.