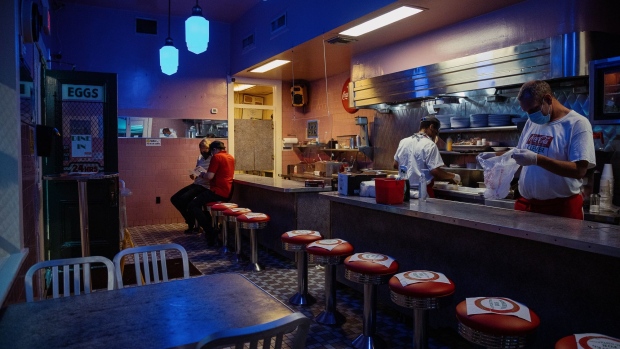 Customers sit as employees prepare food in a restaurant in New Orleans on May 16. Photographer: Bryan Tarnowski/Bloomberg , Bloomberg

(Bloomberg) -- President Donald Trump assured restaurant owners that therapies and a vaccine for the coronavirus and a tax cut would restore their businesses, after they asked him to pour more money into a small-business lending program.

The U.S. coronavirus outbreak has heavily damaged the restaurant industry, which saw most of its dining room business evaporate as customers confined themselves to their home in fear of infection. Millions of restaurant workers have been laid off since March.

Jose Cil, the chief executive of Burger King parent company Restaurant Brands International, told Trump in a meeting at the White House on Monday that the Paycheck Protection Program should be extended to provide 24 weeks’ worth of payroll loans, instead of eight.

Will Guidara, the owner of Eleven Madison Park, told the president that more restaurants would re-open if the loan program is changed to be more beneficial to restaurants and if owners are confident the loans will be forgiven. “We need something more than that, that is specific to independent restaurants,” he said.

The president was noncommittal. “Tremendous progress has been made” in therapies and vaccines, he said, pointing to an announcement by Moderna Inc. earlier Monday that its experimental vaccine was shown to be safe and to create antibodies in 25 human test subjects.

He also mentioned that he has proposed restoring tax deductions for corporate spending at restaurants, which was eliminated in his 2017 tax overhaul. At the meeting, he asked Treasury Secretary Steven Mnuchin how that proposal, which would require congressional action, was proceeding.

The White House is not yet seriously negotiating a fourth round of coronavirus-related stimulus, the likely vehicle for any change in the tax code. Trump and other White House officials have said they want to wait to see how trillions of dollars of stimulus already authorized affects the economy.