Trump threatens to freeze out Huawei

Twin moves by the White House and Commerce Department have made clear where the U.S. stands on Chinese technology, specifically Huawei Technologies Co.

The message to U.S. companies seeking to buy products from the telecom-equipment vendor is unambiguous: Don’t even think about it. The message to Huawei, meanwhile, is: Don’t push us.

“Foreign adversaries are increasingly creating and exploiting vulnerabilities in information and communications technology and services.”

The order then handed bureaucratic and administrative matters to Commerce, which said it’s going to add Huawei to its already extensive “Entity List,” meaning U.S. firms may need a license to sell to the Chinese company.

The development shouldn’t be a great surprise. U.S. officials have been campaigning against Huawei for some time. The clarity that U.S. businesses can’t buy its equipment is a good thing for both sides. On the other hand, dangling the risk of a ban on U.S. component sales to the company is bad. On the former, all parties know where they stand. On the latter, no one does.

This is dangerous territory. Huawei’s compatriot ZTE Corp. felt the full force of such curbs last year when the inability to buy U.S. chips prevented the company from building products. Huawei would be similarly crippled by such a move, even if its own semiconductor prowess would limit the impact.

Yet there’s a huge difference between the two companies. ZTE was not only caught selling equipment to Iran in contravention of an embargo, it reneged on a deal with the U.S. to make amends. It was the second infraction that led to the ban.

Huawei hasn’t been charged with anything, nor has the U.S. made any evidence publicly available that supports its assertion the company’s equipment could enable espionage. To ban Huawei without levying charges would raise tensions between Washington and Beijing by an order of magnitude greater than anything we’ve seen so far.

A ban on sales to the U.S. is less of a concern for Huawei. The US$109 billion company had pretty much given up there anyway. Any restriction on trade is an annoyance, but its executives can at least stop entertaining any dreams of growing in a market where it has minimal presence. Nokia Oyj, Ericsson AB and Samsung Electronics Co. can now fight it out for the U.S. business. 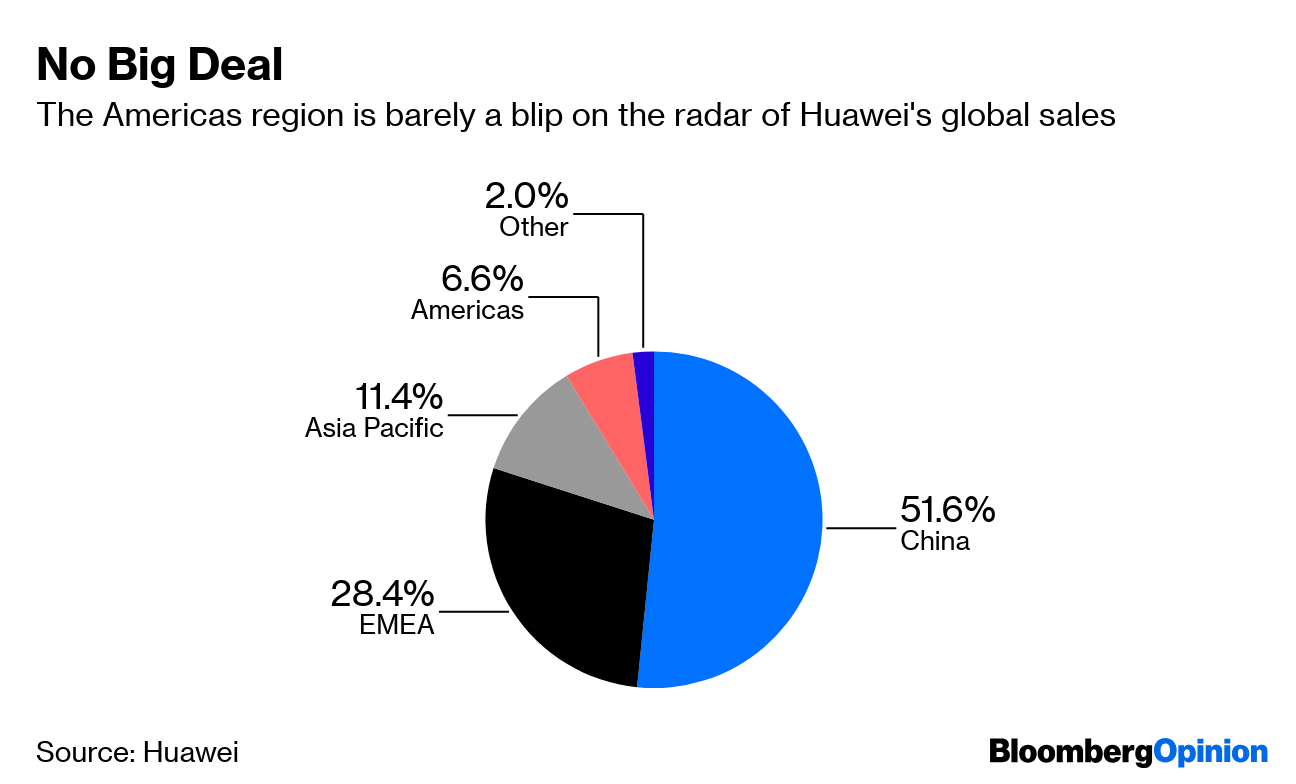 More importantly, the U.S. actions feed a narrative that the campaign against Huawei is political rather than security-related. That could be a useful campaign tool as the company looks to ply its wares in more amenable nations. Europe, Asia and emerging markets in Latin America and Africa stand to be far more lucrative customers in any case.