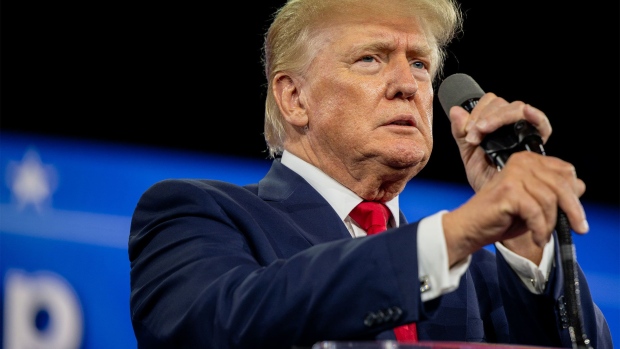 (Bloomberg) -- Almost immediately after federal authorities executed a search warrant at Donald Trump’s Florida home on Monday, former White House adviser Steve Bannon and other aides called for the former president to expedite an announcement for a third White House bid. But there are reasons for him to stave off a declaration.

Trump has been teasing for months that he has decided to run again and that the only question is whether he announces before or after the November midterm elections. He has also said his supporters will be “very happy” with his decision.

The search at his Mar-a-Lago resort in Palm Beach centered on an investigation related to his possible mishandling of classified documents from his time in the White House. While the former president’s staunchest supporters are casting him as a political martyr and egging on his possible 2024 run, here are the reasons why Trump might not launch a presidential campaign yet:

Trump controls $103 million he has banked in his Save America political action committee. The moment he becomes a presidential candidate, he won’t be able to use that money to fund his rallies and other political expenses. He would be limited to taking just $5,000 for his new presidential campaign committee, which would begin with a starting balance of zero.

The Republican National Committee has also been paying some of Trump’s legal bills -- ABC News has reported the RNC has paid almost $2 million to law firms representing Trump since last October -- and the RNC has told Trump that it will stop once he becomes a declared candidate because the party must remain neutral in the GOP presidential race.

Investigations eat away at time allocated for presidential campaign

The apparent investigation into the handling of classified documents is but one tentacle in an octopus of state and federal probes that he’s facing and that threatens to consume his time, leaving little room for the intensive work necessary to run a presidential campaign.

Fulton County District Attorney Fani Willis is looking into possible election interference in Georgia, where Trump called the secretary of state and asked him to “find” 11,780 more votes. The Justice Department is using a grand jury in Washington to investigate efforts by Trump and his inner circle to create false electors and pressure former Vice President Mike Pence to overturn the 2020 election.

Republicans have midterm elections at stake

Some Republicans have been imploring Trump to wait until after the November midterm elections to announce out of concern that he could hamper their strong chances to take one or both chambers of Congress.

A Trump announcement could energize Democrats and divert Republicans’ messaging on inflation, crime and President Joe Biden’s own poor approval rating. There is already concern within the party that Trump has elevated weak candidates in US Senate primary races who could lose winnable races for Republicans in the November statewide general elections.

“It would have a destructive impact on our party’s chances this fall,” Republican Governor Larry Hogan of Maryland, a Trump critic and potential 2024 candidate, said in a statement. “Republicans must offer a new direction for the future, not constantly re-litigate the grievances of the only person who lost to Joe Biden and still can’t beat him according to recent polls.”

And should Republicans fail to take control of Congress in November and Democrats keep both chambers through 2026, Trump could be blamed and would likely be facing even more investigations should he mount a successful 2024 bid.

An announcement removes the suspense

Trump, the former star of “The Apprentice” reality television show, is a master at dominating news coverage. Speculation about when he will announce another run is generating stories alongside those about investigations. He has been casting himself as a victim against a government hellbent on keeping him from returning to the White House. And that’s also a message on which he’s sought to fundraise.