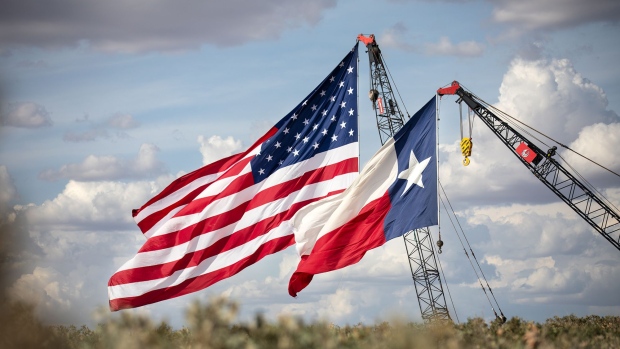 MIDLAND, TX - JULY 28: The American and Texas flags are raised at the site of a Double Eagle Energy rig on July 28, 2020 in Midland, Texas. President Donald Trump is making his 16th visit to the state, where he will tour a rig owned by Double Eagle Energy and deliver remarks. (Photo by Montinique Monroe/Getty Images) , Photographer: Montinique Monroe/Getty Images North America

President Donald Trump is looking to deep-pocketed energy barons to help jump start his sputtering re-election campaign on Wednesday during a stop in Texas, a traditional Republican bastion that has become increasingly competitive for Democrats.

Trump is raising money for the Republican National Committee and his campaign at a pair of fundraisers in the west Texas city of Odessa before visiting nearby Midland to deliver a speech at Double Eagle Energy Holdings LLC, the White House said. He’ll also tour an oil rig for the first time as president.

Trump has a mixed record addressing oil-industry priorities, making his trip all the more crucial. Although he’s celebrated American “energy dominance,” a theme the White House says he will tout in his speech, he isn’t a conventional oil-backing Republican president in the mold of George W. Bush, who was raised in Midland and made a career as an oilman like his father before moving to the White House.

“Promises to assist the industry have long been among Trump’s talking points but getting them across the finish line is a recurrent problem,” said Dan Eberhart, a Trump donor and chief executive of drilling services company Canary Drilling Services LLC, which operates near Midland and Odessa.

Some energy industry figures have complained that Trump has prioritized his personal political interests over their industry’s, an issue magnified when the coronavirus pandemic forced widespread shutdowns that crushed fuel demand. But executives have also been galvanized after Democratic candidate Joe Biden doubled down on his US$2 trillion climate plan, which is aimed at ending U.S. reliance on fossil fuels.

The president’s visit comes at a time when Democrats’ hopes of running a close race or defeating Trump in Texas have been buoyed by polls showing Biden with a narrow lead, or barely trailing the president. Trump won the state in 2016 by 9 percentage points, but the RealClearPolitics polling average shows Trump virtually tied with Biden.

Trump’s diminished standing in Texas has coincided with a surge in coronavirus infections there. Cases topped 11,000 per day earlier in July before they began to fall. Texas Republican Governor Greg Abbott embraced Trump’s call to re-open his economy in the spring, but was forced to roll back some moves as the virus spread.

The Permian Basin, which covers parts of western Texas, is one of the country’s richest oil and natural gas areas and doubles as a major source of campaign cash for the GOP. Political donations from people working in Midland and Odessa are more than triple the level seen in 2016, and many top donors are prominent energy figures.

The visit could deliver a cash infusion for Trump. Donors must pay US$100,000 to gain access to a roundtable with the president or US$2,800 to attend a luncheon, according to an invitation posted on the Trump campaign’s website. For US$50,000 per couple, donors can get their photo taken with Trump. The events are expected to raise US$7 million for Trump Victory, according to a GOP official.

Double Eagle Energy, the company that operates the drill rig Trump will visit, is a private-equity backed venture run by co-CEOs Cody Campbell and John Sellers, both 38. Campbell and Sellers are two of the most high-profile “shalennials” who made a fortune by getting in early on the shale boom, flipping leases and buying up drilling land in the Permian Basin before larger operators came in, paying top dollar for a slice of the action.

The Fort Worth-based pair have made in excess of US$500 million according to the Bloomberg Billionaires Index, and became Republican donors as their wealth grew. Since 2017, Campbell and Sellers have combined to give US$268,300 to Republicans, FEC records show, including US$62,500 to Trump’s re-election effort.

That’s more than executives at bigger Permian producers, like publicly traded Diamondback Energy Inc. and Pioneer Natural Resources Co., whose CEOs each gave less than six figures to federal campaigns and PACs during that period.

With coronavirus raging, petroleum demand down and prices plummeting, times are much tougher for the oil and fracking business. Campbell said in an interview that he plans to speak to Trump about “the discrimination our industry is facing from the financial industry,” referring to the difficulty of obtaining loans.

Double Eagle Energy didn’t take government stimulus money but other, smaller entities that Campbell and Sellers invest in did. One of them, Double Eagle Natural Resources, received a loan of between US$350,000 and US$1 million, according to government data.

Political donations from residents of Midland and Odessa stand at US$15.6 million since the beginning of 2019, more than three times higher than at the same point in the previous general election cycle, according to data from the FEC.

Javaid Anwar, the Pakistan-born CEO of Midland Energy Inc. far and away tops the list as the biggest donor in the two cities. He and his wife Vicky Anwar contributed US$2.3 million to Trump and other Republicans since the beginning of last year.

Other major donors from the Permian Basin include the Scharbauer family, who have owned vast tracts of land since the 19th century, and Tim Dunn, CEO of oil producer Crownquest Operating LLC and a well-known fiscal conservative who runs libertarian advocacy groups.

Energy industry leaders have complained that despite his supportive rhetoric, Trump has routinely prioritized other segments of the U.S. economy, including coming to the defense of coal at the expense of natural gas and adopting tariffs to spur American steel making that caused pain for oil producers. They were also disappointed in his decision to forgo a chance expand offshore oil and gas leasing in the eastern Gulf of Mexico, amid concerns it would hurt his chances of re-election in Florida. Other efforts to assist the industry have been blocked in court.

Trump won plaudits for personally intervening this spring to help broker a global pact to cut oil output amid the collapse in demand. But even as he pressed Saudi Arabia and Russia to slash crude production, the president frustrated industry leaders by touting low oil and gasoline prices as a “tax cut” for consumers. And while the administration has weighed proposals to help producers, like paying them to leave oil in the ground, “little has gone according to plan,” Eberhart, the Canary Drilling Services executive, said.

During his speech, Trump plans to claim credit for the U.S. energy boom by citing his administration’s moves to cut regulations, streamline permitting and encourage private investment in energy infrastructure, according to the White House.

Trump’s campaign has downplayed the chances of a victory in Texas for Biden, whom this month linked the issue of climate change to the fight for racial justice. Trump campaign manager Bill Stepien dared the Biden campaign to pour money into the state, telling reporters last week, “I’ll even buy their first ad.”

Overall, Trump “has done a really good job supporting our industry” over the past four years and is best placed to keep domestic oil production alive, Campbell said. “There’s such a threat against us.”

--With assistance from Rachel Adams-Heard, Bill Allison and David Wethe.