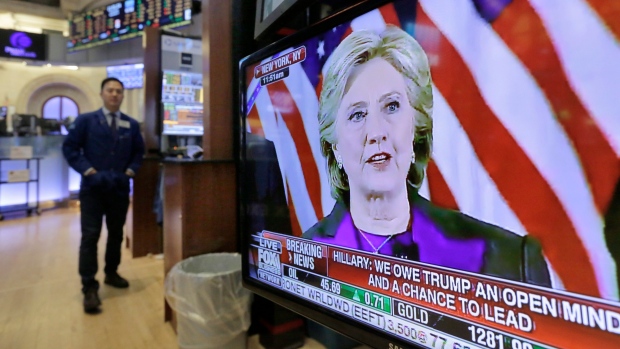 Donald Trump put aside the celebrations and began planning his 73-day transition to the White House on Wednesday as rival Hillary Clinton promised to bury the bitterness of their long presidential race and work to unify a divided country.

After the Republican Trump's stunning upset of the heavily favoured Clinton, Democratic President Barack Obama and leading figures in the Republican Party who had struggled to make peace with Trump all vowed to move past the ugliness of an angry and sometimes personal campaign to seek common ground.

"Donald Trump is going to be our president. We owe him an open mind and the chance to lead," Clinton, the Democratic nominee, said in a concession speech in New York before noon on Wednesday, joined by her husband, former President Bill Clinton and daughter Chelsea.

With a row of American flags in the background, she told supporters her loss was painful "and it will be for a long time," and that she had offered to work with Trump as he prepares to begin his four-year term on Jan. 20.

"We have still have not shattered that highest and hardest glass ceiling. But some day, someone will." —Hillary

"This loss hurts. But please never stop believing that fighting for what’s right is worth it." —Hillary

Trump's victory marked a crushing end to Clinton's second quest to become the first woman president. She also failed in a White House bid in 2008.

Obama, who campaigned hard against Trump, invited him to the White House for a meeting on Thursday after a brutal night for his Democratic Party, which also fell short of recapturing majorities in both chambers of Congress.

"We are now all rooting for his success in uniting and leading the country," Obama said at the White House, adding he and his staff would work with Trump to ensure a successful transition. "We are not Democrats first, we are not Republicans first, we are Americans first."

Trump and his senior aides were meeting at Trump Tower in New York on Wednesday to begin the transition. Trump will enjoy Republican majorities in both chambers of the U.S. Congress that could help him implement his legislative agenda.

"He just earned a mandate and we now just have a unified Republican government," House of Representatives Speaker Paul Ryan, who had a strained relationship with Trump, told reporters in Wisconsin, saying Congress would "hit the ground running" in January.

In his victory speech early on Wednesday, he also promised to embark on a project to rebuild American infrastructure and to double U.S. economic growth.

Worried that a Trump victory could cause economic and global uncertainty, investors initially fled stocks worldwide but Wall Street bounced back from the dramatic overnight sell-off and the U.S. dollar hit its highest level against the Japanese yen in nearly four months.

The Mexican peso recouped some losses after falling to a record low. The currency has been vulnerable to Trump's threats to rip up a free trade agreement with Mexico and to tax money sent home by migrants to pay to build a border wall.

Such a beautiful and important evening! The forgotten man and woman will never be forgotten again. We will all come together as never before

Joined by his family, Trump spoke to cheering supporters in a New York hotel ballroom, saying it was time to heal divisions and find common ground after a campaign that exposed deep differences among Americans.

"It is time for us to come together as one united people," Trump said. "I will be president for all Americans."

His comments were an abrupt departure from his campaign trail rhetoric in which he repeatedly branded Clinton as "Crooked Hillary" amid supporters' chants of "lock her up."

Trump's campaign manager, Kellyanne Conway, on Wednesday nonetheless did not rule out the appointment of a special prosecutor to investigate Clinton's past conduct, a threat Trump made in an election debate last month.

Despite losing the state-by-state electoral battle that determines the U.S. presidency, Clinton narrowly led Trump in the nationwide popular vote, according to U.S. media tallies.

While Clinton, 69, won Hispanics, black and young voters, she did not win those groups by greater margins than Obama did in 2012. Younger blacks did not support Clinton like they did Obama. She won eight of 10 black voters between the ages of 35 and 54.

At 70, Trump will be the oldest first-term U.S. president. The presidency will be Trump's first elected office, and it remains to be seen how he will work with Congress. During the campaign Trump was the target of sharp disapproval, not just from Democrats but also from many in his own party.

Foreign leaders pledged to work with Trump but some officials expressed alarm that the vote could mark the end of an era in which Washington promoted democratic values and was seen by its allies as a guarantor of peace.

During the campaign, Trump expressed admiration for Russian President Vladimir Putin, questioned central tenets of the NATO military alliance and suggested that Japan and South Korea should develop nuclear weapons to shoulder their own defense burden.

Russia and Putin appeared to be winners from Trump's victory. Defying years of U.S. foreign policy orthodoxy, the Republican had promised much warmer relations with Moscow, despite Russia's intervention in the Syrian civil war and its seizure of Ukraine's Crimea region.

Russia's parliament erupted in applause after a lawmaker announced that Trump had been elected, and Putin told foreign ambassadors he was ready to fully restore ties with Washington.

"It is not an easy path but we are ready to do our part and do everything to return Russian and American relations to a stable path of development," Putin said.

Russia is hoping that improved relations could yield an elusive prize: the lifting or easing of sanctions imposed by the United States and the European Union to punish Moscow for its 2014 annexation of Crimea and support for separatists in eastern Ukraine.

Iran urged Trump to stay committed to the nuclear accord between Tehran and world powers. Several authoritarian and right-wing leaders hailed Trump's victory.

Other officials abroad, some with senior roles in government, took the unusual step of denouncing the outcome, calling it a worrying signal for liberal democracy and tolerance in the world.

"Trump is the pioneer of a new authoritarian and chauvinist international movement. He is also a warning for us," German Vice Chancellor Sigmar Gabriel said in an interview with the Funke newspaper group.

U.S. neighbour Mexico was pitched into deep uncertainty by the victory for Trump, who has often accused it of stealing U.S. jobs and sending criminals across the U.S. border.

Trump campaigned on a pledge to take the country on a more isolationist, protectionist "America First" path.

He wants to rewrite international trade deals to reduce trade deficits and has taken positions that raise the possibility of damaging relations with America's most trusted allies in Europe, Asia and the Middle East.

Trump survived a series of blows on the campaign, many of them self-inflicted, including the emergence in October of a 2005 video in which he boasted about making unwanted sexual advances on women. He apologized but within days, several women emerged to say he had groped them, allegations he denied. He was judged the loser of all three presidential debates with Clinton.

A Reuters/Ipsos national Election Day poll offered some clues to the outcome. It found Clinton badly underperformed expectations with women, winning their vote by only about 2 percentage points.