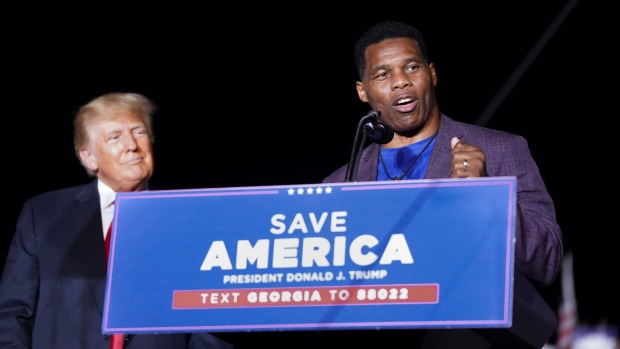 (Bloomberg) -- Donald Trump plans to hold a rally via telephone for Herschel Walker ahead of Georgia’s US Senate run-off on Tuesday, opting not to campaign in-person and potentially draw more blame for hurting the GOP’s midterm election efforts.

Trump is doing the so-called tele-rally for Walker on Monday evening, according to a person familiar with the matter. The former president has held such calls on the eve of other elections to encourage turnout and support for his endorsed candidates. Walker supporters and others will be able to dial in for a conference call to hear from Trump.

Walker is locked in a close runoff race with Democratic Senator Raphael Warnock that will either bolster the slim Democratic majority in the upper chamber, allowing for a one-seat edge on committees and other advantages over Republicans, or keep it at the 50-50 tie it’s been since President Joe Biden took office.

Trump’s Georgia call comes after Republicans unsuccessfully lobbied him to postpone his Nov. 15 announcement of a third presidential bid in 2024 until after Tuesday’s run-off election to avoid overshadowing the party’s efforts to push Walker to victory.

The ex-president was blamed for a disappointing GOP midterm performance after he sought to use the midterm election cycle to tighten his grip on the party by elevating candidates who floundered in many key general election contests. Walker, whose campaign has been dogged by allegations he bankrolled abortions of former girlfriends despite supporting federal bans, is among those Trump hand-picked.

Trump was also blamed for hampering GOP turnout in the two Senate runoff elections in Georgia last year that Democrats won to take control of the upper chamber. Trump held a rally in Georgia on Jan. 4, 2021, on the eve of the run-offs that Warnock and Democrat Jon Ossoff ultimately won but focused on his false claims that the 2020 presidential election was rigged and stolen.

The former president has continued to focus on his electoral loss, posting on his Truth Social platform on Saturday that his defeat should be overturned and that “rules, regulations, and articles, even those found in the Constitution” should be terminated.

Trump suffered GOP primary losses in Georgia earlier this year as he failed to oust Republican Governor Brian Kemp, Secretary of State Brad Raffensperger and other statewide officeholders for their refusal to help overturn his electoral loss. They easily defeated Trump-backed challengers.