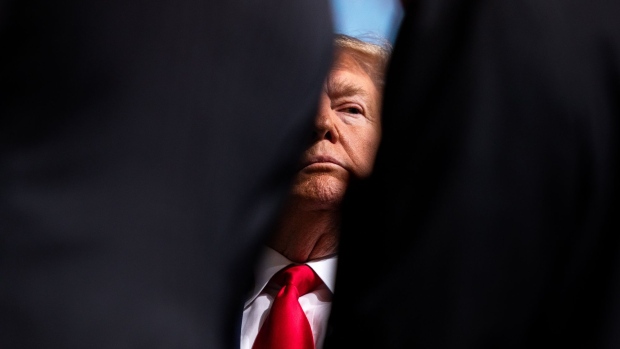 The House Judiciary Committee recommended the impeachment of Donald Trump in a party-line vote Friday that reflected bitter partisan disagreement over whether the ultimate constitutional punishment fits the nature of the president’s alleged misconduct.

The votes to advance two articles of impeachment for consideration by the full House next week will inevitably lead to Trump becoming only the third president in U.S. history to be impeached.

Andrew Johnson in 1868 and Bill Clinton in 1998 were impeached by the House but acquitted in their Senate trials. That is all but certain to be the outcome for Trump.

The Judiciary Committee voted on separately on each of the two counts — one charging him with abuse of power and the other with obstruction of Congress — approving both on identical 23-17 votes.

“The institutional power of Congress to safeguard our liberties by providing a check and balance on the executive is crucial to the Constitution scheme to protect our liberties.” Judiciary Chairman Jerrold Nadler said Thursday night during the second day of the panel’s hearing.

Speaker Nancy Pelosi, Nadler and other House Democratic leaders have cast the president’s actions in his dealings with Ukraine as leaving them no choice but impeachment to protect the nation and the election from further wrongdoing by the president.

One of the articles accuses Trump of “corruptly soliciting” investigations in Ukraine that would aid his re-election campaign. The second alleges that no previous U.S. president “has ever ordered such complete defiance of an impeachment inquiry or sought to obstruct and impeded so comprehensively the ability of the House of Representatives to investigate ‘high crimes and misdemeanors.’”

Limiting the counts against to Trump to two articles was by design. Pelosi and party leaders rejected a broader set of charges that some members of the party argued should have incorporated findings from former Special Counsel Robert Mueller’s report. The leaders viewed the circumscribed approach as the straightest path to maintaining unity among Democrats.

Representative Hakeem Jeffries of New York, chairman of the House Democratic caucus and a member of the Judiciary Committee, told reporters during a break that Democrats have enough votes in the full House to impeach the president.

“The articles of impeachment will pass,” Jeffries said, though he said he doesn’t know how many Democrats will vote against them.

Separately, the Senate is preparing for an impeachment trial that likely will begin in January. White House aides Eric Ueland and Pat Cipollone met with Senate Majority Leader Mitch McConnell Thursday to discuss strategy for that phase of the process.

Republicans must decide how many defense witnesses the president should present, if any. Several GOP senators said this week that there’s a growing consensus that the trial should be limited and relatively quick, moving to a vote on acquittal without hearing witnesses.

“We are having a lot of good conversations with Senate Republicans and will continue to do that through the next few days and weeks as we work through all these issues and priorities,” Ueland said.

The committee’s debate and vote to send the articles to the full House comes after two days of hearings in which the White House refused to offer a defense case. But Republicans on the committee have led attacks, essentially describing the impeachment effort as a sham or even an attempted coup d’etat.

The impeachment probe was formally launched by Pelosi in late September after revelations from a still unnamed whistle-blower’s complaint that raised alarms about a July 25 phone call between Trump and newly elected Ukrainian President Volodymyr Zelenskiy.

Zelenskiy was in need of military aid and a White House meeting as show of clear U.S. support as his country battle’s Russian aggression. Although Congress had appropriated the assistance, the Trump administration refused to release it without giving a reason to Defense and State department officials who administer aid.

A rough transcript of the call released by the White House shows Trump brought up a discredited conspiracy theory about Ukrainian involvement in the hacking of Democratic servers during the 2016 election, as well as an unsubstantiated allegation that former Vice President Joe Biden stopped a corruption investigation of his son, a board member of a Ukrainian energy company.

“The call transcript shows no quid pro quo” between Trump and Zelenskiy during their July 25 call, said Republican Representative Jim Jordan of Ohio, who proposed an amendment that would eliminate the article accusing Trump of abusing his power. He said there was “no pressure, no pushing, no linkage whatsoever between assistance money and any kind of investigation.”

Jeffries countered by saying, “The president was caught red-handed trying to pressure a foreign government to target an American citizen.”

The committee rejected also an amendment by Republican Matt Gaetz that would rewrite the abuse of power article to target Biden’s son Hunter Biden and his board membership on the Burisma Holdings energy company.

Prior to the Judiciary Committee’s involvement, investigative committees led by the Intelligence panel collected evidence, conducted interviews, and held public hearings about whether Trump used the power of his office the the prospect of aid to get Zelenskiy to announce an investigation of Biden, a contender for the 2020 Democratic presidential nomination.

The majority and minority party reports that came out of those investigations will be attached to the resolution containing the articles to be sent to the Senate, if the full House votes to impeach.