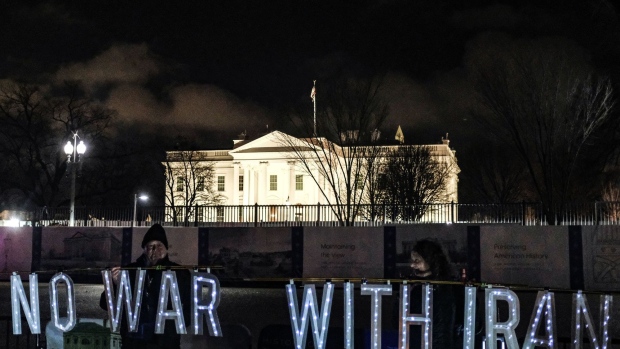 U.S. President Donald Trump speaks to members of the media before boarding Marine One on the South Lawn of the White House in Washington, D.C., U.S., on Wednesday, July 29, 2020. Trump will look to deep-pocketed energy barons to help jump start his sputtering re-election campaign today during a stop in Texas, a traditional Republican bastion that has become increasingly competitive for Democrats. Photographer: Bloomberg/Bloomberg , Photographer: Bloomberg/Bloomberg

(Bloomberg Opinion) -- President Donald Trump has done Democratic presidential nominee Joe Biden a considerable favor by calling for “snapback sanctions” against Iran under a 2015 United Nations Security Council resolution. Biden and his surrogates have repeatedly pledged to rejoin the 2015 Iran nuclear deal — known as the Joint Comprehensive Plan of Action, or JCPOA — from which Trump withdrew in May 2018. Having rightly driven a stake through the deal’s heart by withdrawing, however, Trump is now giving it diplomatic CPR.

The White House asserted on Aug. 20 that the U.S. was still a “JCPOA participant state” under Resolution 2231, and thus had standing to invoke snapback. Of course, when Trump left the deal, he directed the State Department to “take all appropriate steps to cease the participation of the United States in the JCPOA.”

Although head-snapping reversals in Trump’s foreign policy are the norm, not the exception, even for him this was a landmark. It could foreshadow more stunning changes in a second term when, safely re-elected, Trump would face far fewer political constraints. And, ironically, it is a move helpful to Biden should he win the presidency.

Supporters of the nuclear deal on the Security Council (the other four permanent members and Germany) rejected Trump’s snapback ploy, as widely predicted. After consultations with the council president, only the Dominican Republic agreed with the U.S., thus laying the predicate for simply ignoring the American request rather than initiating snapback procedures.

Tuesday afternoon, the council president, Dian Triansyah Djani of Indonesia, announced simply that he planned to take no further action. That means the burden of moving forward is fully on Washington, but not under the snapback rules. Therefore, any U.S. step, such as proposing a resolution to overrule the council president, would need at least nine votes, and, if deemed substantive rather than procedural, no vetoes by any permanent member. At least for now at the UN, the U.S. is in a box of its own making.

State Department lawyers, in an opinion not available publicly, apparently argue that, having been once defined as a “JCPOA participant state,” the U.S. is still one for snapback purposes. This is not only incorrect legally and not the intention of the nuclear pact’s drafters but, ironically, could backfire on the U.S. if Biden wins the election.

By asserting that the U.S. has any rights in even one aspect of the deal, Trump opens the possibility for creative diplomats to find other rights — and therefore responsibilities — arising under Resolution 2231 and other provisions of the agreement. This would give legitimacy to any Biden administration effort to fully re-enter the JCPOA.

The better logic is this: America is either in the deal or out of it. This reasoning is simple, straightforward and, most important, reflects reality. The argument that we are “participants” for some purposes but not others should worry U.S. policy makers; it is far more likely to be used against the U.S. by foreign nations when it tries to extricate itself from other international agreements that no longer advance national interests. When we get out, we should be out, period. Such longer-term strategizing, however, is alien to Trump’s approach to foreign policy, and much else.

Countermeasures against the U.S. ploy continue to accumulate. Along with denying the U.S. has standing, some JCPOA supporters say Washington has failed to undertake the prerequisites spelled out in the pact’s dispute-resolution clauses. These involve a complex, potentially lengthy process to resolve compliance disputes precisely to avoid Security Council confrontations that could cause the entire deal to collapse.

The Trump team has ignored these procedures, relying instead upon actions that Britain, France and Germany initiated back in January, which are unresolved. This gambit reflects Washington’s private fear that following the nuclear pact’s process before convoking the council really is a necessary prerequisite. If required, this would constitute a second example of U.S. “participation” in a deal it supposedly exited.

Critically for the deal’s advocates, however, the agreement’s procedures provide ample opportunity to bog the whole snapback process down. As I wrote in 2015: “Although each stage has prescribed time limits, these can be ‘extended by consensus’ — a United Nations-style formula for endless palavering before, finally, an aggrieved party convokes the Security Council to vote on snapping back the sanctions. But it’s hard to ‘snap back’ when you’re trapped in a diplomatic La Brea Tar Pit.”

Thus, having to enter the dispute-resolution process could well drag things past November’s election, perhaps even past the 2021 inauguration. At a minimum, requiring the U.S. to slog through the JCPOA morass creates confusion and delay, thereby affording the pact’s defenders more time to find other obstacles blocking UN sanctions from coming back into force.

Why Trump is playing this dangerous, counterproductive charade is unclear. Even if the UN’s suspended sanctions were revived, they would not likely impose any materially greater burdens on Iran than the already crushing effect of the 2018 resumption of unilateral American sanctions, and others added since then.

Moreover, the real answer to Tehran’s nuclear ambitions is currently being administered by whomever is stealthily destroying key elements of Iran’s nuclear and ballistic-missile programs. The Trump administration’s activity at the UN these days is a sideshow, perhaps largely intended for domestic political purposes. Diplomacy’s role instead lies in continued efforts to persuade the U.K., France and Germany to ditch the pact.

The alternative may be a President Joe Biden reviving the JCPOA, with deep gratitude toward Donald Trump for making it possible.