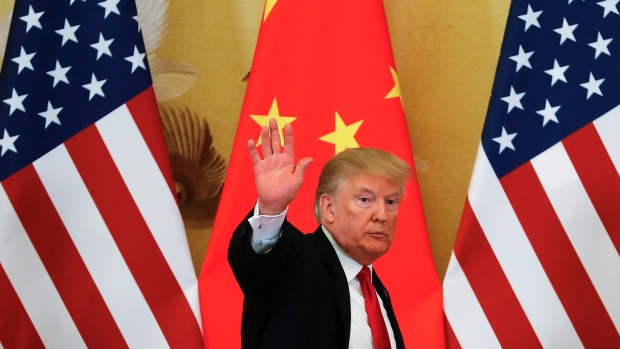 U.S. President Donald Trump has decided to impose tariffs on about US$50 billion in Chinese imports, according to two people familiar with the matter, in a move likely to escalate trade tensions between the world’s two biggest economies.

The size of the approved tariffs matches the scale of duties proposed in April, suggesting the president isn’t bowing to warnings that trade penalties may derail relations with China as the U.S. seeks to maintain pressure on North Korea over its nuclear weapons program.

The Trump administration had prepared a refined list of Chinese products to be hit with tariffs that hones in on technologies where China wants to establish itself as a leader, according to five different people familiar with the matter.

U.S. Treasury Secretary Steven Mnuchin, U.S. Commerce Secretary Wilbur Ross and U.S. Trade Representative Robert Lighthizer were all with Trump in a meeting Thursday when the president made the decision, said White House Press Secretary Sarah Huckabee Sanders, who declined to confirm what was decided. Economic adviser Larry Kudlow, who had a heart attack on Monday, didn’t take part, she said.

In April, the U.S. revealed an initial list targeting about 1,300 products worth US$50 billion in Chinese imports. Some products were taken off the preliminary list but none were added, said one of the people familiar with the decision, who spoke on condition of anonymity to describe the action before its announcement.

The U.S. is scheduled on Friday to release an updated list of Chinese tariff targets. The White House has said the duties will be implemented “shortly” after the release of the list, though no date has been set.

The tariffs could be applied in stages, according to two of the people briefed on the administration’s plans. Duties will take effect on some products within weeks. Tariffs on any products added to the U.S. Trade Representative’s list would be subject to a period of public feedback.

Trump said this week he’ll confront China “very strongly” over trade in the coming weeks. “China could be a little bit upset about trade because we are very strongly clamping down on trade,” the president said in a Fox News interview on Wednesday.

The administration has said it wants to aim its tariffs at industries identified in China’s 2025 plan. “Made in China 2025” identified 10 industries that the world’s second-biggest economy wants to become globally competitive, and dominant in during this century.

It’s not clear whether the administration will still target that amount with the list it reveals on Friday.

By plowing ahead with tariffs against China, the Trump administration would undermine efforts by the world’s two biggest economies to avoid a trade war that the International Monetary Fund has warned could undermine global growth. The president has been threatening tariffs against China since U.S. officials concluded that Beijing abuses American intellectual-property rights.

The two countries have been negotiating on trade issues, but President Xi Jinping’s government has indicated it will drop any commitments made in recent talks if Trump follows through on his tariff threat. China has pledged to retaliate in kind.

Trump is shaking up the world economic order with his zeal for tariffs and embrace of trade conflict as a way to secure benefits for the U.S. He threw a summit of the Group of Seven wealthy economies into turmoil by revoking support for the group’s joint statement and berating the summit’s host, Prime Minister Justin Trudeau.

So far, the U.S. has imposed tariffs on steel and aluminum imports. Economists expect the direct impact on the U.S. economy to be modest. But if the president follows through on all the duties he’s threatened, including the tariffs against China, U.S. inflation could accelerate by 15 basis points, according to Goldman Sachs.

Trump’s tariffs may also influence his efforts to bring peace to the Korean Peninsula. Beijing is an important player in talks with North Korea on abandoning its nuclear-weapons
program.

The president has been under pressure from U.S. lawmakers over his decision to soften a penalty on Chinese telecom-equipment maker ZTE Corp. (ZTCOY.PK) In April, the U.S. banned ZTE from buying American technology for seven years, effectively putting the company out of business. But Trump said this month ZTE could avoid the ban if it paid at least US$1 billion in penalties, among other things. U.S. senators are seeking ways to block the deal in Congress.

With assistance from Justin Sink and Jennifer Jacobs