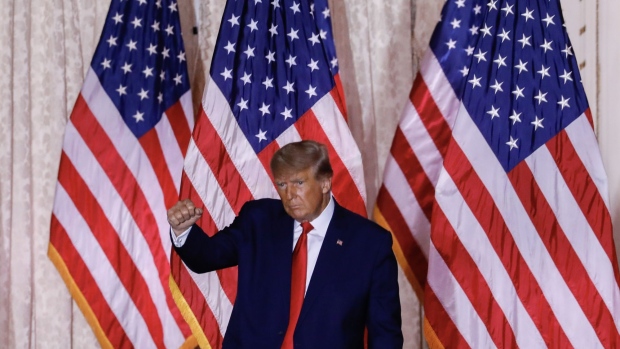 Former US President Donald Trump gestures after speaking at the Mar-a-Lago Club in Palm Beach, Florida, US, on Tuesday, Nov. 15, 2022. Trump formally entered the 2024 US presidential race, making official what he's been teasing for months just as many Republicans are preparing to move away from their longtime standard bearer. , Bloomberg

Trump’s emergency motion for a temporary restraining order, filed in Florida, sidesteps the New York court where the fraud suit was filed, New York Attorney General Letitia James said in a filing Wednesday in federal court in West Palm Beach. Trump’s request also should be denied because there is no emergency, she said.

“Instead, there is a just a disgruntled litigant, Donald J. Trump, who impermissibly seeks to evade the jurisdiction of a New York state court that is presiding over an enforcement action alleging pervasive fraud and illegality by him and others in the conduct of his New York-based business and has issued a number of rulings that he considers unfavorable,” James said in the filing.

Trump sued James in Florida to block her from gaining access to details about his assets — a key part of the standard discovery process in litigation. She claims Trump for years manipulated the value of his assets to deceive banks and insurers.

The former president asked the Florida court to block James from gaining access to the 2020 and 2022 amendments to his revocable trust. But the trust “owns all of the assets that are valued in Mr. Trump’s financial disclosures that are the subject of the fraud allegations at the center of the New York enforcement action,” James said.