What to Expect From This Week's U.S.-China Talks

In the history of Donald Trump’s presidency, tweets mentioning China have tended to be bad news for the S&P 500. The good news is, he’s been tweeting about it less.

Data compiled by Bloomberg News showed that since the start of 2017, the U.S. president’s tweets included the word “China” or “trade” on 208 days when U.S. stock markets were open. Comparing S&P 500 daily performance and those instances, regardless of whether it was positive or negative, showed the number of up and down closes on those days are about equal. However, the losses were bigger than the gains. There were 17 days that saw a fall of more than 1.5 per cent, and only five days of advances bigger than 1.5 per cent. 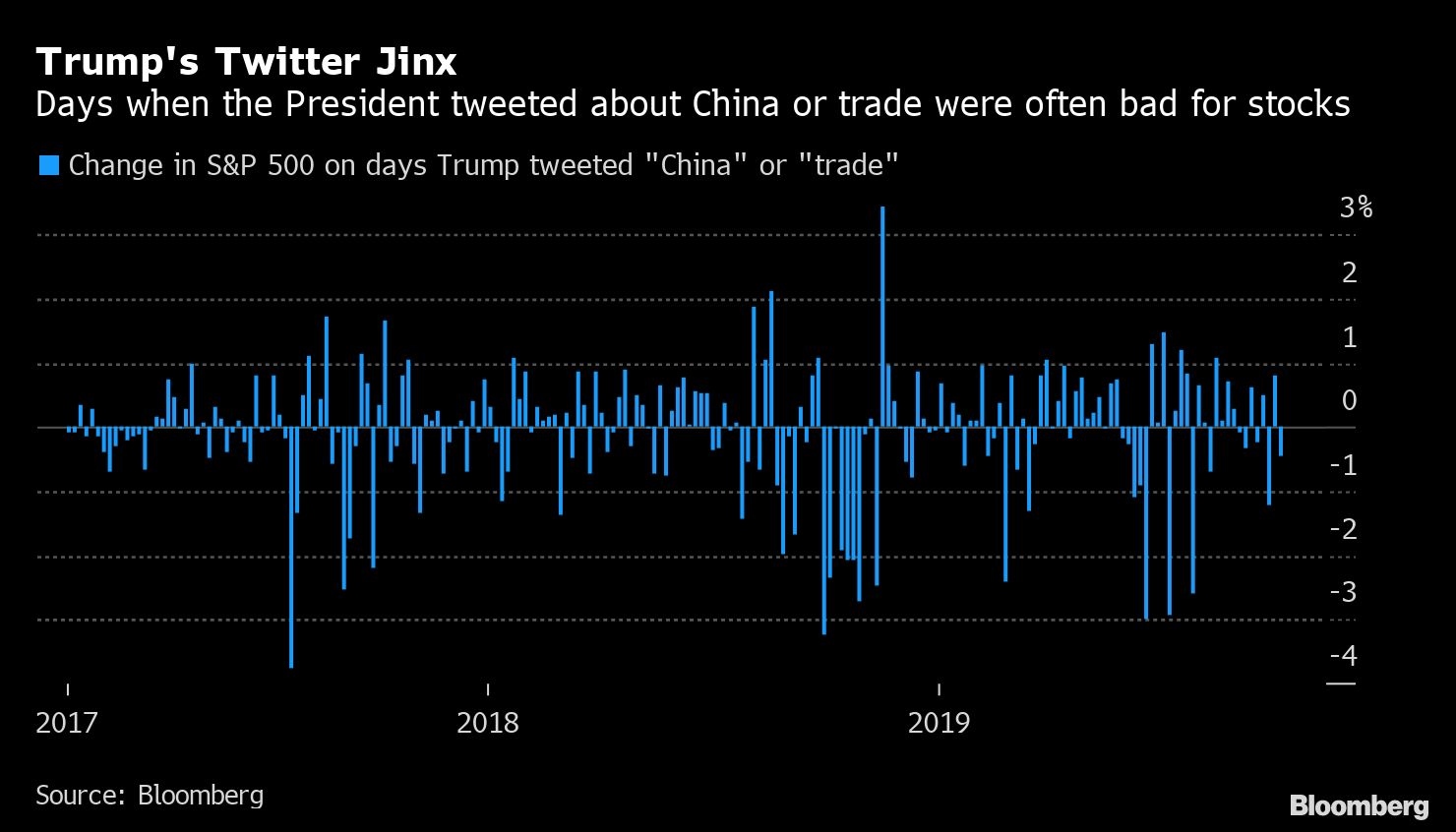 Cumulative returns over those 208 days was a decline of 14 per cent, while any investor that bought the U.S. benchmark at the end of 2016, and has since held that position would have seen a 30 per cent price gain. The impact of the U.S. president’s tweets extends beyond stocks -- they have also had a sometimes-sizable impact on Fed funds futures, according to Goldman Sachs Group Inc. analysis.

Of course, Trump’s Twitter account -- and whether it features China -- is but one of the many drivers of markets. Among others, there’s slowing factory growth and inverted yield curves. Yet it’s undeniable that when the U.S. president tweets, everyone listens. That was the case in May, when Trump tweeted that he would increase tariffs on US$200 billion of Chinese imports to 25 per cent from 10 per cent. That effectively kicked negotiations into the long grass, and sent the S&P 500 down more than six per cent for the month.

The silver lining for investors is that recently, the U.S. president appears have been focused more on the House impeachment inquiry rather than the trade war with China.

An analysis of Trump’s tweets in the past 30 days showed words that appeared most frequently included “Schiff”, “Ukraine” and “conversation”. That compared with the previous 30-day period, which saw more occurrences of the words such as “trade” and “tariffs”. The number of mentions of “China” dropped from 49 to 19, now matching mentions of “impeachment”. The analysis did not account for whether the tweets were positive or negative in nature. It also excluded the most common English prepositions, pronouns and verbs, as well as words frequently used by Trump, such as “great” and “president”.

Here’s the list of the 20 words that appeared the most in Trump’s tweets in the past 30 days:

Here’s the list of words that were in the top 20 for the previous 30-day period and have since dropped out: