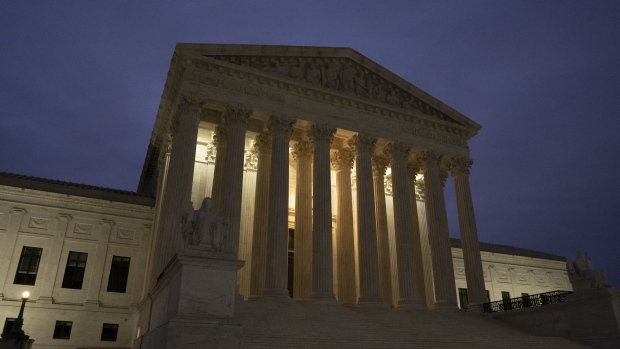 The U.S. Supreme Court building stands at dawn in Washington, D.C., U.S., on Saturday, Nov. 30, 2019. The House Intelligence Committee is preparing to release a scathing report alleging President Donald Trump engaged in a months-long effort to seek foreign interference in the 2020 election and obstruct a congressional investigation. , Bloomberg

(Bloomberg) -- President Donald Trump’s administration asked the U.S. Supreme Court to clear the federal government to resume executions as soon as next week.

The emergency filing on Monday urged the court to lift a hold that a trial judge placed on the federal death penalty last month. The Justice Department wants the hold lifted in time for Daniel Lewis Lee to be put to death on Dec. 9.

Attorney General William Barr said in July that the federal government would end a 16-year hiatus on imposition of the death penalty. Barr said at the time that execution dates had been set for five men, starting with Lee.

Lee was convicted of the 1998 killing of an Arkansas family of three, including an 8-year-old girl, as part of what prosecutors said was a rampage geared toward setting up a whites-only nation.

In blocking federal executions from resuming, U.S. District Judge Tanya Chutkan in Washington faulted the administration’s plan to use pentobarbital sodium for all lethal injections. She said the plan violated a 1994 law that requires the U.S. government to use the procedures of the state where the death sentence was imposed.

Congress “expressly reserved those decisions for the states of conviction,” Chutkan wrote.

A federal appeals court said Monday it wouldn’t let executions resume while the administration presses its appeal of Chutkan’s ruling. That prompted U.S. Solicitor General Noel Francisco to turn to the Supreme Court.

The Supreme Court has become more receptive to the death penalty with the arrival of two Trump appointees, Justices Neil Gorsuch and Brett Kavanaugh.

Only three people have been executed for federal crimes since the U.S. death penalty was reinstated in 1988. The last federal execution took place in 2003.

To contact the editors responsible for this story: Joe Sobczyk at jsobczyk@bloomberg.net, Laurie Asséo, John Harney