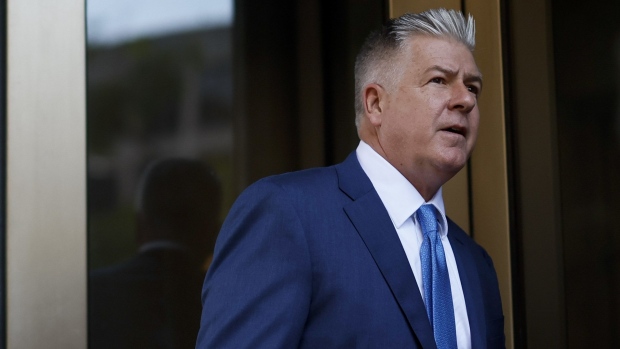 (Bloomberg) -- As the legal risks facing Donald Trump and his inner circle continue to expand, the former president and key allies have been playing round robin with a small pool of defense lawyers.

Trump’s legal matters are multiplying -- the FBI searched his Mar-a-Lago estate Monday as part of an investigation into whether presidential records, including classified material, were mishandled -- and he’s pulling from a cadre of lawyers in his orbit with proven conservative bona fides or a track record of representing people loyal to him.

Trump to Be Questioned by New York Attorney General Wednesday

“It used to be in Washington that white-collar lawyers would represent both Democrats and Republicans who were caught up in an investigation. What mattered was whether the lawyer was good and not the lawyer’s ideology,” defense attorney Matt Kaiser, who also teaches attorney ethics at Georgetown University Law Center, said in an email. These days, “It’s a D.C. lawyer version of the political polarization that is happening across the country.”

Trump’s latest lawyers in connection with the congressional and criminal investigations into the Jan. 6 insurrection are Evan Corcoran and John Rowley III, Washington-area attorneys already involved in legal fights related to the Capitol attack and its aftermath.

Corcoran and Rowley are representing Trump in negotiations with federal prosecutors over potential executive privilege issues related to Trump’s conversations with advisers during Jan. 6, according to a person familiar with the situation. The Washington Post reported that Corcoran and lawyer Christina Bobb met with a senior Justice Department official and several investigators earlier in the summer at Mar-a-Lago to discuss and review boxes related to the probe into whether Trump had records that should have gone to the National Archives.

Corcoran is fresh off longtime Trump adviser Steve Bannon’s contempt of Congress conviction by a federal jury in Washington. Rowley is representing former Trump trade adviser Peter Navarro in his pending contempt case, and has counseled Trump allies Stephen Miller and Cleta Mitchell in trying to fend off their own Jan. 6 committee subpoenas. Rowley has also represented Republican Representative Scott Perry, who rebuffed a Jan. 6 committee subpoena and who released a statement on Tuesday saying the FBI had seized his cell phone.

Both lawyers have donated to Republican candidates in the past, Federal Election Commission records show, including, in Rowley’s case, Trump.

Corcoran and Rowley did not return requests for comment on Tuesday. A Trump spokesman and Bobb, a former host for the conservative-leaning One America News Network and a lawyer for Trump’s Save America PAC, also didn’t respond to messages seeking comment. Florida attorney Lindsey Halligan, who has said she’s working for Trump, told CBS she was also at Mar-a-Lago during the FBI’s visit; she did not return requests for comment.

There are a number of overlapping circles when it comes to who has represented Trump and the people around him. Besides Corcoran, Bannon’s legal team featured David Schoen, who represented Trump in his post-Jan. 6 impeachment trial before the US Senate, and Robert Costello, whose past clients include Rudy Giuliani. A jury found Bannon guilty last month, but that doesn’t mean Corcoran is done with the case; last week Bannon’s legal team filed a motion arguing for a new trial.

The last time Trump went to court over the fate of his White House records, he was represented by Jesse Binnall. Binnall, who unsuccessfully argued to block the Jan. 6 committee’s access to some of Trump’s archived materials, had previously been part of the defense team representing Michael Flynn against allegations that he lied to the FBI during the investigation into Russian interference in the 2016 election. Flynn’s case paired Binnall with Sidney Powell, the conservative attorney who became a driving force behind the false conspiracy theories that there was widespread fraud in the 2020 election.

It’s not easy being Trump’s lawyer. Michael Cohen went to prison for tax fraud, bank fraud, violations of campaign finance laws and lying to Congress for his boss. Giuliani had his law license stripped in New York and the nation’s capital for his role in lawsuits seeking to overturn the result of the 2020 presidential election; Powell and John Eastman face similar challenges. And the House Jan. 6 committee heard some insiders in Trump’s White House called his election lawyers “Team Crazy.”

He’s known to replace some of his higher profile lawyers with those who are lesser known and have smaller practices, such as Alina Habba, who came into Trump’s orbit as a member of his golf club in Bedminster, New Jersey. She’s taken over his challenges to the New York attorney general’s probe of his business and his defense against a fraud suit brought by his niece and a long-running defamation case brought by writer E. Jean Carroll.

Lawyers can represent multiple clients in related cases or even those facing shared criminal charges, but they have to follow ethics rules enforced by state bars. They have an obligation to make sure clients understand any conflicts of interest.

A client can waive those conflicts, but prosecutors can later raise a flag and judges can step in if they think that diverging interests are too deep to ensure that each person gets appropriate legal representation -- if one person wants to plead guilty and cooperate with the government against the other, for instance, said Kathleen Clark, a legal ethics expert who practices in Washington and is a professor at Washington University in St. Louis School of Law.

If Navarro had a change of heart and decided to cut a deal with prosecutors and cooperate against Trump, that could pose a conflict problem for Rowley, Clark said. She said there could be other conflicts if lawyers handling Jan. 6-related matters had some other connection to Trump -- if they were being paid by someone on his behalf or from funds he controlled, for instance.

“It’s in Trump’s interest certainly for them all to stick together and resist, whether it’s Congress or the Justice Department investigation or any civil litigation that would be aimed at helping uncover info about Jan 6,” Clark said.