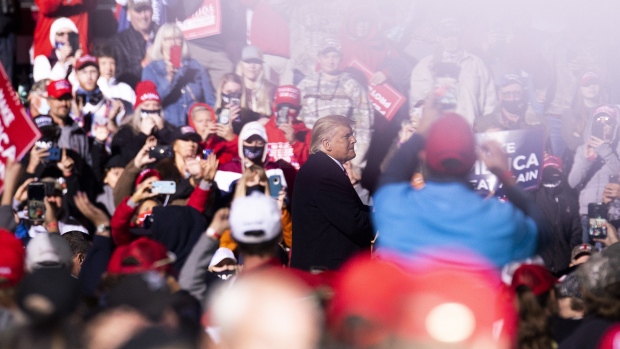 (Bloomberg) -- President Donald Trump learned of Justice Ruth Bader Ginsburg’s death only after concluding a nearly two-hour campaign rally in Minnesota, where he told supporters they should re-elect him in part because of the Supreme Court.

“She just died?” Trump said to reporters after an aide appeared to tell him the news. “She led an amazing life. She was an amazing woman.” Before he departed Minnesota, he didn’t respond to a question about filling the vacancy.

Ginsburg’s death was announced by the Supreme Court just before 7:30 p.m. in Washington, after Trump had begun speaking at the rally. The president delivered remarks for nearly 90 minutes while unaware of her passing, even saying at one point, “the next president will get one, two three or four” Supreme Court nominations.

Flags at the White House were lowered to half-staff while Trump was still on stage.