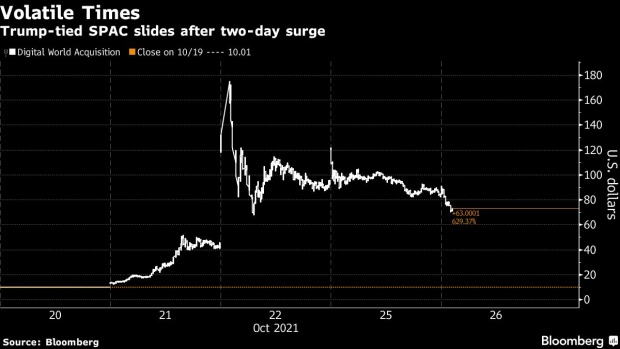 Shares of the SPAC fell for a second day on Tuesday after skyrocketing as much as 1,225% last week, as retail traders shifted their focus to other corners of the stock market. Digital World, which is set to merge with Trump’s new social media platform, Trump Media & Technology Group, declined 15% to $71.75 at 10:15 a.m. in New York. It fell nearly 11% on Monday.

Digital World was still trending on trader chatroom Stocktwits and was among the most mentioned tickers across Reddit’s WallStreetBets. It was also among the most actively traded assets on Fidelity’s platform at the start of Tuesday’s session, but sell orders overshadowed the number of buys.

The two-day decline also came after short-seller Iceberg Research warned of risks for investors and said “Trump will renegotiate at the expense of DWAC retail holders.” Shares of the blank-check company have tumbled nearly 60% from an Oct. 22 peak of $175.