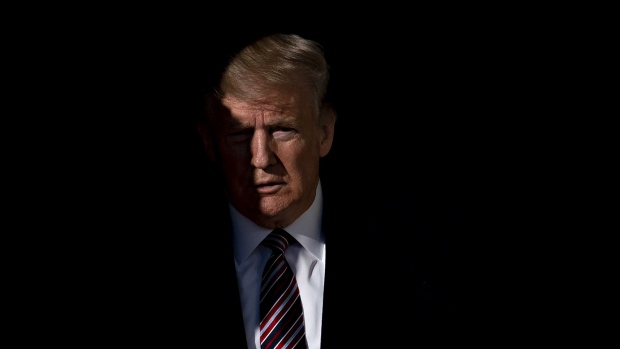 U.S. President Donald Trump arrives to greet Boyko Borissov, Bulgaria's prime minister, not pictured, at the South Portico of the White House in Washington, D.C., U.S., on Monday, Nov. 25, 2019. Trump and Borissov are expected to discuss security in Eastern Europe and comes after a series of meetings to address security in a region where Russia seeks to retain its traditional influence. , Photographer: Andrew Harrer/Bloomberg

President Donald Trump, under escalating pressure from Democrats weighing his impeachment, suffered a stinging blow as a federal appeals court ordered two banks to provide Congress with his financial records.

The ruling, by a three-judge panel of the U.S. appeals court in New York, means Trump will lose control of his long-secret business and personal accounts at Deutsche Bank AG and Capital One Financial Corp. unless the full court reconsiders the decision or the U.S. Supreme Court blocks it. The court rejected arguments by Trump and the Justice Department that the House Financial Services and Intelligence Committees had no legitimate reason to seek the information.