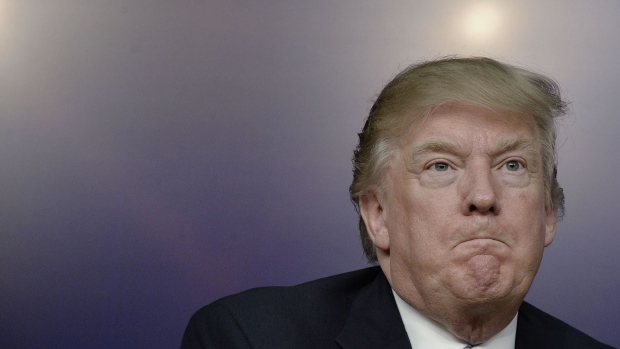 U.S. President Donald Trump listens during a town hall meeting with executives on the America business climate in the South Court Auditorium of the White House in Washington, D.C., U.S., on Tuesday, April 4, 2017. Trump has vowed to flatten regulatory hurdles for American business, and Congress's proposed EPA rules for science would make commerce easier. , Bloomberg

(Bloomberg) -- The Justice Department’s criminal investigation into Donald Trump’s handling of White House documents got a major boost Thursday, as a federal appeals court ruled a judge was wrong to interfere with the probe by appointing a special master to review material seized from the former president’s Mar-a-Lago home.

The decision marks the latest setback for Trump in a months-long legal fight that government lawyers say has stymied their work. Prosecutors are exploring whether Trump or anyone else mishandled government records -- including material classified at the highest level of secrecy -- or engaged in obstruction.

In its order Thursday, the 11th US Circuit Court of Appeals reversed the decision of a federal judge in September to appoint a special master and block the Justice Department from using the bulk of the documents while the review was being conducted. The panel featured three judges appointed by Republican presidents, including two nominated by Trump.

“The law is clear. We cannot write a rule that allows any subject of a search warrant to block government investigations after the execution of the warrant,” the appeals court said. “Nor can we write a rule that allows only former presidents to do so. Either approach would be a radical reordering of our caselaw limiting the federal courts’ involvement in criminal investigations.”

Whether the latest order permanently halts the special master’s work wasn’t immediately clear. Trump could petition the full 11th Circuit to reconsider the the ruling by the three-judge panel, or he could ask the US Supreme Court to intervene.

Trump spokesperson Steven Cheung sent a statement describing the appeals court opinion as “purely procedural” and claiming the “decision does not address the merits that clearly demonstrate the impropriety of the unprecedented, illegal, and unwarranted raid on Mar-a-Lago.” The statement didn’t indicate whether Trump would continue to press the case in court.

During arguments before the 11th Circuit last week, one of the judges said there’d been no showing that the search was unlawful. In response, a lawyer for Trump said his team was in the process of trying to establish that.

The appellate panel concluded that Trump had failed to meet the high bar necessary for courts to intervene in a pending criminal investigation and that US District Judge Aileen Cannon in Florida had lacked jurisdiction to step in to the Mar-a-Lago probe. The court agreed that it was “extraordinary” for a search warrant to be executed at the home of a former president, but that didn’t mean Trump was entitled to special treatment, especially with no evidence that the search was unlawful.

“To create a special exception here would defy our Nation’s foundational principle that our law applies ‘to all, without regard to numbers, wealth, or rank,’” the judges wrote.

The panel also rejected Trump’s argument that he needed a special master and an injunction against the government’s use of the seized documents to protect records he claimed are designated as personal under the Presidential Records Act.

“The status of a document as personal or presidential does not alter the authority of the government to seize it under a warrant supported by probable cause,” the judicial panel said. “Search warrants authorize the seizure of personal records as a matter of course.”

The decision was per curiam, meaning no single member of the three-judge panel claimed authorship. The panel featured two judges who had been nominated by Trump -- Britt Grant and Andrew Brasher -- and Chief Judge Bill Pryor, a George W. Bush appointee.

The 11th Circuit handed down its ruling as the special master, US District Senior Judge Raymond Dearie, approaches a Dec. 16 deadline to complete his review. Dearie is vetting a master log of disputed documents and is set to issue a report to Cannon with recommendations. A Trump lawyer said during a recent hearing that the universe of disagreements had narrowed to approximately 930 documents. Cannon will decide whether to accept Dearie’s conclusions.

Trump had early success blocking the government’s access to several dozen boxes of documents and other items seized from Mar-a-Lago in August under a court-approved search warrant. Cannon -- who was nominated by Trump to the south Florida federal district court -- in September granted Trump’s request to bring in an outside special master.

Cannon’s ruling allowed Trump to press claims that at least some documents should be kept out of the Justice Department’s hands because they were protected by legal privileges or because he’d designated government records as “personal” under federal law. It also fueled his attacks on the investigation as politically motivated.

On appeal, however, Trump was handed a string of losses. The 11th Circuit previously sided with the Justice Department when it came to a key subset of about 100 records with classified markings. A three-judge panel agreed with the government that those records should be excluded from the special master review, freeing the government to use them in the criminal investigation; Grant and Brasher had been part of that decision. The US Supreme Court rejected Trump’s request to step in.

In the latest appeal, the Justice Department argued that Cannon lacked jurisdiction to entertain Trump’s request for a special master and to enter the injunction temporarily barring the use of documents under review. Courts are supposed to limit their involvement with criminal investigations before charges are filed, and Trump’s situation didn’t present the “exceptional” circumstances that would justify a judge stepping in, government lawyers argued.

Government lawyers -- now under the leadership of newly appointed special counsel John L. “Jack” Smith -- said that lack of access to the bulk of the seized evidence hamstrung the investigation because the mingling of classified information and other government records with other material could be relevant to building any case.

During arguments before the three-judge panel on Nov. 22, judges questioned Trump attorney James Trusty about whether the Mar-a-Lago search was unusual compared to a typical criminal investigation, aside from Trump’s status as a former president. Trusty said they weren’t seeking “special treatment,” but also insisted that the political context was relevant.

Pryor said during the hearing that the court had to be “concerned” about setting precedent that would allow any target of a criminal investigation to go into court and have a judge “interfere” with the executive branch’s work.