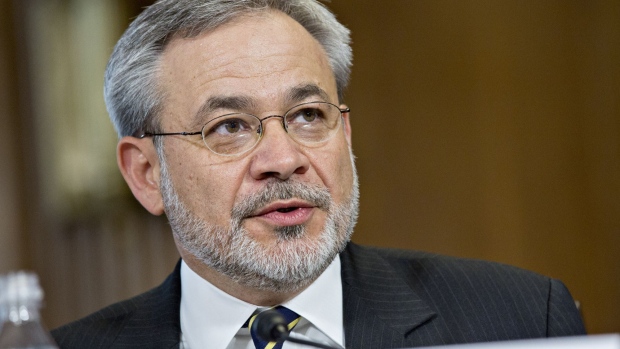 Trump had been saying he planned to elevate Dan Brouillette, a former George W. Bush administration official, to the post. The promotion, which was announced by the White House on Thursday, had been anticipated by many in Washington energy circles.

Perry said he plans to leave the agency by Dec. 1. Brouillette will be the acting secretary immediately after Perry departs, but unlike officials serving in an acting capacity at other agencies, the White House has sent his name to the Senate for a confirmation vote.

Brouillette, 57, a Louisiana native, isn’t expected to deviate much from the priorities of his soon-to-be former boss, which have included selling more U.S. natural gas abroad and protecting the electric grid from cyber attack.

Like Perry, Brouillette backs efforts to have the federal government subsidize coal and nuclear plants that have been unable to compete with cheaper electricity from natural gas and renewables. So far, such a federal intervention has been unsuccessful.

Brouillette previously worked at the agency as an assistant secretary for congressional and intergovernmental affairs under Bush, and as staff director for the House Energy and Commerce Committee, where he played a role in crafting energy legislation. He also was a senior executive in the policy office of Ford Motor Co. and financial services provider United Services Automobile Association.

“It has been the opportunity of a lifetime to serve as secretary of Energy these past few years,” Perry said in a statement. “As I prepare to depart the coolest job I’ve ever had, I have the utmost confidence the department will continue to make great strides under Dan Brouillette.”

--With assistance from Jennifer A. Dlouhy and Josh Wingrove.