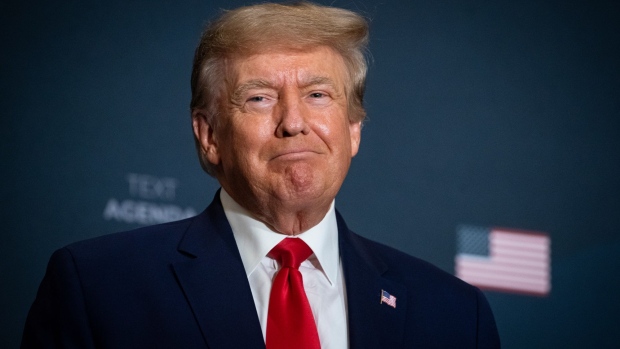 Former US President Donald Trump during the America First Policy Institute's America First Agenda Summit in Washington, D.C., US, on Tuesday, July 26, 2022. Trumps remarks come on the heels of a House hearing that portrayed him standing by indifferently, even vindictively, for hours as a mob of his supporters battled police and chased lawmakers through the halls of the Capitol. , Bloomberg

(Bloomberg) -- Former President Donald Trump, who has teased he plans to run again in 2024, was the clear choice in a presidential straw poll of attendees at the Conservative Political Action Conference, beating out Florida Governor Ron DeSantis.

Trump had an approval rating of 99% and was the choice of 69% of about 1,000 attendees at the conference in Dallas who voted, followed by DeSantis at 24%. Texas Senator Ted Cruz had 2% with other potential candidates at 1% or less.

In a separate question without Trump as a candidate in 2024, DeSantis was the overwhelming choice at 65%, followed by the former president’s son, Donald Trump Jr., at 8%, Cruz at 6% and former Secretary of State Mike Pompeo at 5%.

While it’s unscientific, the poll released Saturday is an indication of sentiment among GOP activists and grass-roots voters. Republicans look to the poll results to gauge the standing of Trump and his potential rivals in 2024, especially DeSantis, who didn’t attend the conference.

Support for Trump was little changed from the 70% he received in the poll taken at the 2021 CPAC gathering in Dallas last July and was higher than the 59% in a CPAC straw poll in February at its event in Orlando.

Trump said he has already decided on whether to make another White House bid, and the only question remaining was when he would make the announcement -- before or after the November midterm elections.

The CPAC poll also asked attendees whom they would like to see as a potential Trump running mate. DeSantis was the overwhelming choice at 43%, followed by South Dakota Governor Kristi Noem at 9% and Pompeo at 7%.