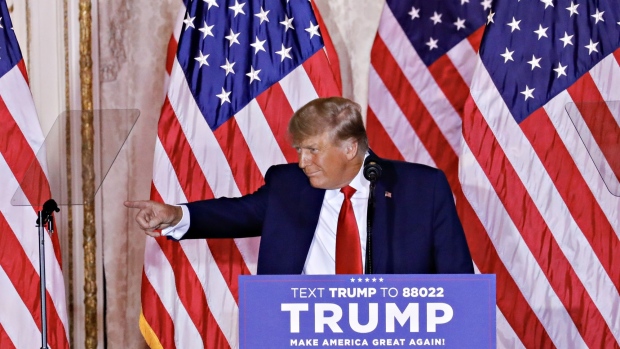 Former US President Donald Trump speaks at the Mar-a-Lago Club in Palm Beach, Florida, US, on Tuesday, Nov. 15, 2022. Trump formally entered the 2024 US presidential race, making official what he's been teasing for months just as many Republicans are preparing to move away from their longtime standard bearer. , Bloomberg

(Bloomberg) -- Former President Donald Trump’s political operation gave $40 million to an allied super-PAC ahead of the midterm elections but didn’t contribute to his new campaign committee after he launched his third run for the White House last month.

Trump raises money for his campaign and leadership political action committee, Save America, through the Trump Save America Joint Fundraising Committee, which took in $15.7 million between Oct. 20 and Nov. 28. It spent $11.6 million and ended the period with $10.4 million cash on hand, according to the latest filings with the Federal Election Commission.

The joint fundraising committee didn’t transfer any money to Trump’s new presidential committee, which he launched Nov. 15, though it will eventually. Of every dollar taken in since he became a candidate, 99 cents will go to his 2024 campaign.

Save America, which manages the war chest Trump built after losing the 2020 election, transfered $40 million on Nov. 3 to Make America Great Again Inc., a super-PAC set up in late September by allies of the former president. MAGA Inc. spent $15 million to influence the midterm elections, mostly supporting Senate candidates that Trump endorsed. The super-PAC, which will back Trump’s presidential campaign, had $54.2 million cash on hand on Nov. 28.

By law, Save America can donate only $5,000 to Trump’s primary campaign, but has yet to do so. It has plenty of time and more than enough money to do it, with $20.8 million in the bank.

Trump’s new presidential campaign committee won’t have to report detailed information on its financing to the FEC until Jan. 31, 2023.