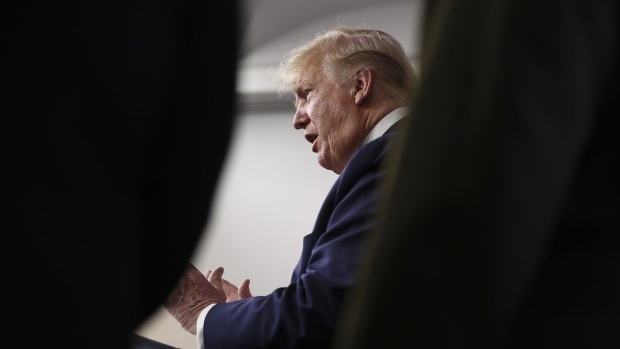 President Donald Trump signed an order Monday temporarily halting access to several employment-based visas, affecting hundreds of thousands of people seeking to work in the U.S. The technology industry said the move would hurt the economy.

The order freezes new H1-B and H-4 visas, used by technology workers and their families, as well as L visas for intra-company transfers and most J visas for work- and study-abroad programs, including au pairs, through the end of the year.

The issuance of new green cards will also remain halted through the end of the year.

The new action will pause some H2-B visas for seasonal workers, with an exception for those in the food-processing industry, according to a senior administration official who briefed reporters Monday.

Twitter Inc. and Amazon.com Inc. called the order “short-sighted,” saying immigrant tech labor could help the U.S. economic recovery from the coronavirus pandemic. Alphabet Inc. Chief Executive Officer Sundar Pichai said on Twitter he was “disappointed” and that “we’ll continue to stand with immigrants and work to expand opportunity for all.” Tesla Inc. CEO Elon Musk said in a tweet the order goes too far.

Very much disagree with this action. In my experience, these skillsets are net job creators. Visa reform makes sense, but this is too broad.

India’s NASSCOM, the trade body representing IT service giants like Infosys Ltd. and Tata Consultancy Services Ltd., called the Trump administration’s decision “misguided and harmful to the US economy.” Noting the benefits that overseas workers bring, it said in a statement that “Without their continued contributions to the U.S. economy, the economic pain would worsen, industry would slow, and the timeline for a treatment and cure of Covid-19 would lengthen.”

Trump acted with the U.S. facing an unemployment rate of 13.3% after businesses closed or reduced staff in response to the virus outbreak. The president’s order won’t affect immigrant workers who already hold the visas.

“Under the extraordinary circumstances of the economic contraction resulting from the Covid-19 outbreak, certain nonimmigrant visa programs authorizing such employment pose an unusual threat to the employment of American workers,” Trump said in his order.

Speaking Saturday in an interview with Fox News, Trump said he wants Americans to take jobs that would otherwise go to people granted the visas.

“We have plenty of people looking for jobs,” he told Fox. “I think it’s going to make a lot of people very happy. And it’s common sense.”

Trump tweeted at the height of the coronavirus pandemic that he planned to “temporarily suspend immigration into the U.S.” Industry groups, such as the U.S. Chamber of Commerce and the Information Technology Industry Council, wrote to Trump to express concern that restrictions would disrupt business and hamper growth.

In the past few years, the administration has moved to tighten the H-1B program, and the approval rate for applications has fallen. The technology industry relies on H-1B visas to hire overseas talent, particularly in the fields of science and engineering. Critics say some companies have abused the program to displace American workers.

About three-quarters of H-1B visas go to people working in the technology industry, though the exact levels vary year by year. The number of non-immigrant visas issued in 2019 declined for the fourth consecutive year, to 8.7 million from 10.9 million in 2015, according to the State Department.

CompTIA, a trade group that represents big tech companies like Amazon and Google parent company Alphabet Inc. said the move would deal a lasting blow to the economy.

“Making it more difficult for bright minds to work in the U.S. only benefits our competitors abroad who will attract their talents to build and develop cutting-edge, job-creating goods and services,” said Cinnamon Rogers, CompTIA’s executive vice president for public advocacy.

TechNet, a lobbying group that represents most of the largest tech companies, had been pushing for the Trump administration to show leniency to the hundreds of thousands of H-1B holders already in the U.S. who lost their jobs in the Covid-19 pandemic and now risk falling into illegal status.

Nandini Nair, an immigration partner at Greenspoon Marder, said the new order would have an “enormous effect” on U.S. companies, particularly those in the tech sector. Many spent thousands of dollars filing paperwork for each H-1B visa applicant, she said.

“They expended all of this money and planned their budgets and workforce capabilities on these visas and that’s now shot,” Nair said.

The order not only limits the ability of companies to recruit talent from overseas, but also impacts their current foreign workers who have been waiting to get their visas authorized. When an H-1B visa is awarded to individuals, they must travel to a consulate outside the U.S., typically in their home country, to activate it.

Many workers have been unable to travel since the coronavirus pandemic shut borders across the world. “A lot of these workers are now prisoners in the U.S. because they don’t have a valid visa stamp in their passport -- if they go, they can’t come back in,” Nair said.

However, Fragomen Worldwide immigration lawyer James Pack, who provides counsel to businesses in the tech sector, said the executive order would only have a limited impact on U.S. companies because it only applies to first-time H-1B applicants who are outside the country. Those already working for firms inside the U.S. would not be impacted, Pack said.

The current cap for those visas is 85,000 annually. H-4 visas are issued to immediate family members of H-1B visa holders.

The H1-B program will be restructured to put an emphasis on would-be immigrants with the highest salary offers once the program restarts next year, the senior administration official said. Under such changes, entry-level workers coming from colleges are less likely to get the visa, as the spots will mostly go to people who have master’s degrees or doctorates working in high-earning fields such as trading, algorithms, and IT, said Shannon Donnelly, a partner and immigration attorney at Morgan Lewis.

--With assistance from Yueqi Yang and Saritha Rai.