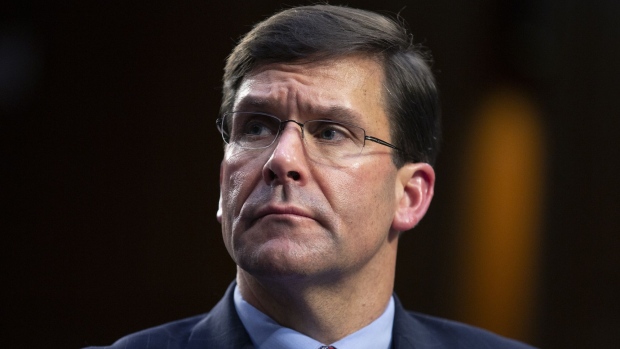 Defense Secretary Mark Esper was fired in a tweet on Monday, as President Donald Trump went after a top aide he blamed for not supporting him sufficiently.

...Chris will do a GREAT job! Mark Esper has been terminated. I would like to thank him for his service.

Esper’s relationship with Trump soured after the Pentagon chief resisted Trump’s inclination to use active-duty forces to quell protests in U.S. cities earlier this year.

Esper’s departure could foreshadow a broader post-election purge of appointees who displeased the president. It also means Trump will have seen the departure of two confirmed defense secretaries in less than two years.

While Esper, 56, had worked with the president on controversial priorities such as sending U.S. troops to the border with Mexico and drawing down forces in Germany, Afghanistan and Syria, the president voiced increasing dissatisfaction with his Pentagon chief in recent months.

Trump said privately in August that he planned to replace Esper after the election, according to people familiar with the discussions, while the defense secretary told people close to him that he intended to leave regardless of the election’s outcome.

The White House had alerted Miller that he should be ready to become acting defense secretary. He had known since at least September, according to two people familiar with the situation.

Miller previously served as the top counterterrorism official at the White House’s National Security Council, where his portfolio was largely focused on what Trump sees as among his biggest foreign policy victories: hostage recovery and the campaign against Islamic State terrorists. He was overseeing the office when the U.S. launched a successful operation to kill Islamic State leader Abu Bakr al-Baghdadi.

Miller was later named deputy assistant Secretary of Defense for Special Operations and Combating Terrorism, and then offered the chance to run the National Counterterrorism Center. He was sworn in on Aug. 10 of this year after winning Senate confirmation on a voice vote.

A veteran of the Army Special Forces, Miller helped draft the 2018 White House counterterrorism strategy - a document that classified Iran and Hezbollah as among the threats facing the United States.

The president was frustrated that Esper, who became secretary in July 2019 after serving as Army secretary and as a former executive at Raytheon Technologies Corp., didn’t do more to publicly defend him on key issues, including Trump’s rejection of reports that Russia paid Taliban fighters “bounties” for the killing of U.S. troops in Afghanistan.

Trump has increasingly sought overt signs of loyalty and a willingness by his top aides to engage in partisan fighting, as demonstrated by Secretary of State Michael Pompeo’s making of a video in support of the president while on an official trip to Jerusalem that was shown at the Republican National Convention in August.

Trump was also angered that Esper in June publicly opposed the idea of deploying active-duty military to contain nationwide protests over racism. He confronted his defense secretary June 3 at the White House after Esper held a news conference in which he said that using active-duty military forces to perform law enforcement within the U.S. is “a matter of last resort” and that the National Guard was better-suited to the task, people familiar with the matter said.

The president again signaled fatigue with Esper on Aug. 15, when he used a derogatory nickname for his defense chief meant to suggest he’s a yes-man.

When asked if he was considering firing Esper, the president replied, “I consider firing everybody. At some point that’s what happens.”

As Esper lost support in the White House, he also found himself under increasing criticism from former top defense officials. Esper and General Mark Milley, chairman of the Joint Chiefs of Staff, came under fire for their decision to join Trump on a walk to a church across the street from the White House in early June after the park there was forcibly cleared of peaceful protesters.

Critics said Esper and Milley’s participation militarized an affair that undercut freedom of speech and assembly.

Retired Admiral Mike Mullen, a former chairman of the Joint Chiefs under Presidents George W. Bush and Barack Obama, wrote in an op-ed for The Atlantic at the time that “our fellow citizens are not the enemy, and must never become so.”

In tacit criticism of the president, Esper called the event a “photo-op” and said he hadn’t realized it was going to take place.

Trump has had a tumultuous relationship with military leaders since taking office. Retired General James Mattis abruptly resigned in December 2018 after the president announced plans to withdraw troops from Syria with little planning. Trump later nominated Patrick Shanahan, who withdrew from consideration in June 2019 after reports of a messy divorce years earlier surfaced.

More recently, Trump’s nominee for another top job at the Pentagon, Brigadier General Anthony Tata, foundered when his confirmation hearing was abruptly canceled and the White House withdrew his nomination. Tata had been dogged by controversy over his past remarks, including derogatory comments about Islam.

Esper’s tenure wasn’t significantly shorter than many of his predecessors. While Donald Rumsfeld and Robert Gates, combined, served more than 10 years in the role, most Pentagon chiefs in recent years have lasted fewer than two years. President Bill Clinton’s first secretary of defense, Les Aspin, served one year and two weeks in the position, the shortest since the Nixon administration.