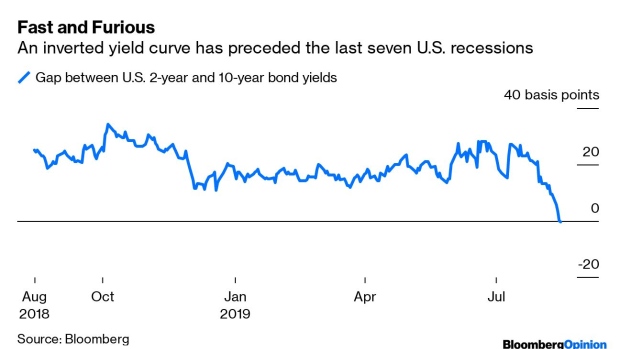 BEIJING, CHINA - AUGUST 22: President of the People's Republic of China Xi Jinping during the Opening Ceremony for the 15th IAAF World Athletics Championships Beijing 2015 at Beijing National Stadium on August 22, 2015 in Beijing, China. (Photo by Lintao Zhang/Getty Images for IAAF) , via Bloomberg

(Bloomberg Opinion) -- It only took a small taste of what a U.S. recession might be like for President Donald Trump to suggest that he wants a trade deal with China after all.

The Dow Jones Industrial Average plunged 800 points in its worst rout of the year after the gap between the two-year and 10-year Treasury yields turned negative for the first time since 2007. An inverted yield curve has preceded the last seven recessions in the U.S.

Ever sensitive to stock movements, the president tried to calm the markets after the close. Abandoning his hawkish trade rhetoric, Trump extended an olive branch to Chinese President Xi Jinping in a series of tweets, calling him a “great leader” and a “good man.” He ended his posts with “Personal meeting?,” without specifying whether he was proposing a summit.

The question is how Xi will respond to Trump’s overture. Who’s more desperate for a trade deal right now?

Consider where China and the U.S. are in their respective business cycles. Since the trade war started, American consumers have sat tight and enjoyed their prosperity – just as Trump has boasted. China’s economy, by contrast, has been having a much tougher time. In the past year and a half, Beijing has had to deal with all sorts of credit issues that could escalate into a wider economic crisis.

Examples abound. Last year, regulators changed margin-financing rules as the stock market suffered one of the world’s worst routs. The declines stemmed partly from listed companies pledging shares as collateral to secure short-term bank financing. This spring, the People’s Bank of China undertook the  first commercial bank seizure in two decades and was forced to calm ensuing jitters in the interbank market. Meanwhile, Beijing has had to deal with periodic peer-to-peer lending crises and bond defaults by state-affiliated entities.

That might sound bad, but it helps China now. If a fireman has to put out fires every day for a year, he gets more proficient. That’s where Beijing is now.

The same can’t be said of the U.S.. The slide in its sovereign long-term bond yields – a measure of investor confidence – has been fast and furious. Just two weeks ago, when Federal Reverse Chairman Jerome Powell described the U.S. rate cut as a “ mid-cycle adjustment,” the gap between the 2-year and 10-year bond yields was still 21 basis points. On Thursday morning in Asia, the 30-year yield, which more reflects traders’ view of the overall health of the economy rather than the depth of the current easing cycle, fell to a record low below 2%.

To be sure, China’s economy is slowing: Industrial output growth is at its weakest since 2002. But digging deep into the data, the picture that emerges is of a government that’s measured and confident. For instance, some of the weakness in the July data reflected moves to rein in shadow financing and restart property deleveraging. If Beijing wants better-looking industrial output numbers, it just needs to reopen the liquidity taps – as we saw in the first quarter.

On Thursday, the PBOC was showing no signs of panic. The central bank rolled over 383 billion yuan ($54 billion) of medium-term facility loans with interest rates unchanged. While the world's largest central banks are racing toward zero rates, the PBOC has been sitting on the sidelines, saving its firepower for later.

China’s system has its advantages when it comes to economic management, as I’ve written. The ability of ministries to co-ordinate their policy responses means China can practice the ultimate in modern monetary theory, which is probably what the U.S. needs right now to restore its yield curve.

So while Trump may think his olive branch is a big deal, the message to Washington is: Don’t think you’ve got China on the ropes. Xi was panicking a year ago; he can afford to wait now.