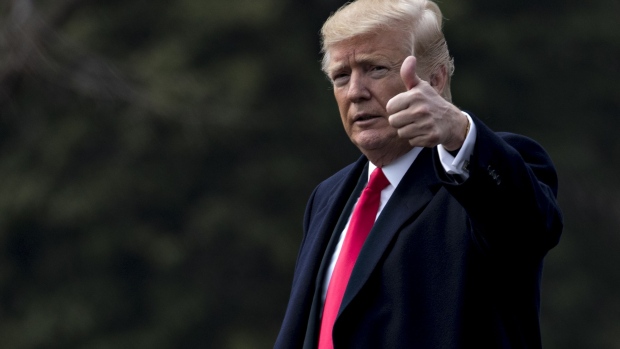 U.S. President Donald Trump gives a thumbs up while walking on the South Lawn of the White House before boarding Marine One in Washington, D.C., U.S., on Thursday, March 29, 2018. Trump on Thursday said his concerns with Amazon.com Inc. predate his election, a day after a report that he's obsessed with regulating it. , Bloomberg

(Bloomberg) -- Donald Trump plans to hold a tele-rally for Republican Glenn Youngkin on Monday night, a day before the Virginia gubernatorial election, according to a person familiar with his plans.

The former president on Wednesday teased the possibility that he would campaign in Virginia before the election, but will do the tele-rally, typically a call with supporters to generate support for the candidate, the person said.

The rally comes as Democrat Terry McAuliffe, the former Virginia governor running against Youngkin, former co-CEO of Carlyle Group Inc., has sought to tether the two Republicans. On Tuesday, President Joe Biden appeared at a McAuliffe campaign rally in Arlington, Virginia, where he repeatedly jabbed his predecessor.

Biden won Virginia by 10 points last November. Polls show the race in a dead-heat in the final stretch after McAuliffe had previously held a consistent lead.

The Youngkin campaign didn’t immediately respond to a message left for comment.