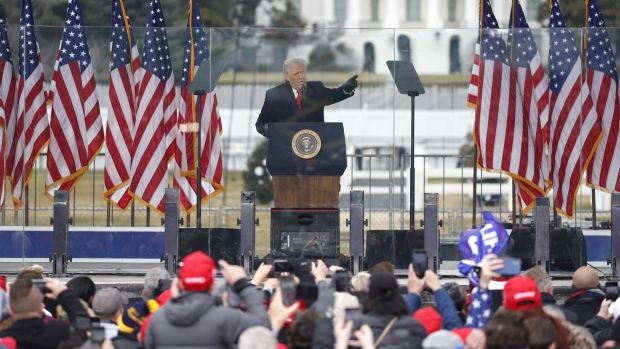 U.S. President Donald Trump speaks during a "Save America Rally" near the White House in Washington, D.C., U.S. , Shawn Thew/EPA/Bloomberg

“Even though I totally disagree with the outcome of the election, and the facts bear me out, nevertheless there will be an orderly transition on January 20th,” Trump said in a statement posted on Twitter by his aide Dan Scavino early Thursday morning.

Trump’s statement came as staff resigned and as congressional allies abandoned him in the aftermath of a mob of his supporters laying siege to the Capitol on Wednesday.

Trump had repeated his pledge that he would never concede at a rally earlier Wednesday.

Trump had pressured lawmakers to object to the results in what is normally a routine process, and urged Vice President Mike Pence to take the extraordinary step of rejecting states outright. Instead, Pence presided over the counting of electoral votes, which resumed after order was restored to the Capitol and ended early Thursday.

“To those who wreaked havoc in our Capitol today, you did not win,” the vice president said when counting resumed. “Violence never wins. Freedom wins. And this is still the people’s House.”

A group of Republicans had prepared objections, perhaps to half a dozen states, but the movement largely fizzled.

Trump’s attempt to undo the results of the Nov. 3 election began almost immediately after the votes had been cast. He and his allies fired barrages of fraud allegations, all of them unproven, and filed lawsuits in several battleground states that Biden had wrested from Trump. State and federal courts rejected their claims.

In the Scavino tweets Trump added, “I have always said we would continue our fight to ensure that only legal votes were counted. While this represents the end of the greatest first term in presidential history, it’s only the beginning of our fight to Make America Great Again!”

Scavino posted the statement for the president because Trump’s own accounts were suspended by Twitter, Facebook and Snapchat for repeatedly putting out false statements about the election.

For years, social media -- especially Twitter -- has been Trump’s preferred way to disseminate information directly to the public. Many of his posts have been flagged as misleading or false, but Wednesday was the first time the president has been kicked off the platforms even temporarily. Twitter threatened to ban Trump entirely if he continues to break the rules.