Donald Trump winning the battle to become the next president of the United States may not have an entirely negative impact on the Canadian economy, according PIMCO’s head of Canadian portfolio management.

In an interview on BNN, Ed Devlin said the drop in the value of the Canadian dollar against the U.S. dollar on Wednesday morning indicates investors feel Trump’s victory is not a net positive for Canada – mainly because of uncertainty about what America’s trade policy will be.

“But it doesn’t necessarily mean the wheels will fall off either,” Devlin said, “Canada is the U.S.’s biggest trading partner and if NAFTA is left broadly in place then it could be okay for the Canadian economy.” 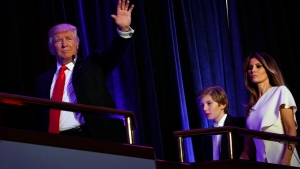 Devlin noted that “a lot was said on the campaign trail; the market is now trying to discern what will become reality.” He added the probability of economically-stimulative measures being approved by the U.S. government may offset the negative impact of a more restrictive trade policy.

He said credit markets are pricing in the possibility of a more inflationary environment, and risk premiums in several asset markets are going up.

Devlin said it will be important to see what Trump says on economic issues in the days to come and who he appoints to key positions -- noting that will give investors a better sense of how they should be positioning their portfolios.