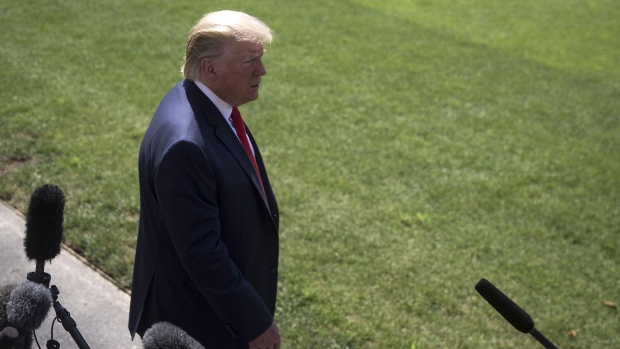 President Donald Trump pushed the Federal Reserve to cut interest rates as policy makers ready for their decision this month on whether to do so.

“Very inexpensive, in fact productive, to move now,” Trump tweeted Monday. “The Fed raised & tightened far too much & too fast.”

The president has repeatedly attacked the Fed for more than a year, calling on policy makers and Chairman Jerome Powell to reduce rates after increasing them in 2018.

Powell and his colleagues do look primed to ease by a quarter percentage point when they meet July 30-31 in Washington. While data on the U.S. economy is generally strong, policy makers have said they are monitoring the risks of slowing global growth and elevated trade tensions. Officials have now entered their quiet period on public comment ahead of the gathering.

Trump also repeated his view in Monday’s tweets that if the Fed had kept rates lower for longer, the U.S. economy would be stronger, and renewed his claim that other nations were manipulating their currencies to steal an advantage over the U.S.

....as we have done, it could have been soooo much better. Interest rate costs should have been much lower, & GDP & our Country’s wealth accumulation much higher. Such a waste of time & money. Also, very unfair that other countries manipulate their currencies and pump money in!

It is far more costly for the Federal Reserve to cut deeper if the economy actually does, in the future, turn down! Very inexpensive, in fact productive, to move now. The Fed raised & tightened far too much & too fast. In other words, they missed it (Big!). Don’t miss it again!