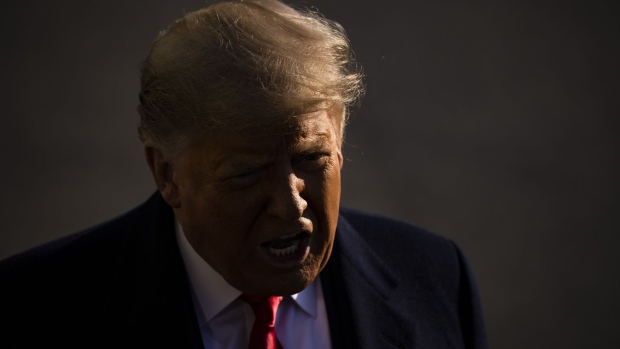 U.S. President Donald Trump speaks to members of the media while departing the White House in Washington, D.C., U.S., on Tuesday, Jan. 12, 2021. Trump plans to tout completed sections of his border wall in Texas on Tuesday, his first public event since encouraging supporters who went on to attack the U.S. Capitol last week. , Bloomberg

(Bloomberg) -- New York City prosecutors investigating Donald Trump said they’ve amassed millions of records from his accounting firm and from a range of banks and real estate companies that did business with the Trump Organization.

In a court filing Friday, the office of Manhattan District Attorney Cyrus Vance Jr. disclosed a summary of the material collected so far in the investigation. It didn’t provide the actual documents, but included a broad overview of what prosecutors have gathered in their two-year inquiry, as well as some of the witnesses who gave testimony.

While much of the material is already familiar from Vance’s indictment of the Trump Organization and its former chief financial officer, Allen Weisselberg, the filing indicated prosecutors have made at least two agreements with witnesses connected to the Trump Organization to provide information in the case, in exchange for a government promise not to use it against them.

Prosecutors also revealed compliance with subpoenas issued to Jeff McConney, a subordinate to Weisselberg, and Keith Davidson, a California lawyer who was involved in 2016 hush money payments made to silence women claiming to have had affairs with Trump.

Also included in the filing were indications the government has documents it marked as “Martabano.” Charles Martabano represented the Trump Organization in its dealings with a property in Westchester County called Seven Springs, which has been a focus of Attorney General Letitia James’ parallel inquiry into Trump’s tax filings.

The disclosure came days after a lawyer for Weisselberg complained to the judge that his client was being overwhelmed with the trove of evidence that prosecutors had collected in the case. The lawyer said that,  as of Sept. 20, he’d received at least six million pages of evidence that been turned over by lawyers with the district attorney and the New York Attorney General’s office.