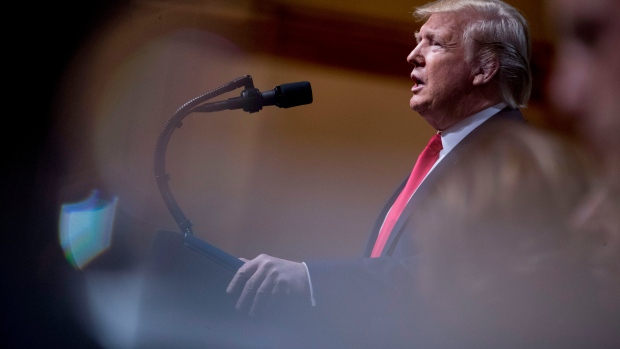 President Donald Trump laid out the central pillar of his 2020 re-election campaign on Tuesday, telling the Economic Club of New York that his policies have generated a boom in growth and jobs.

“We have delivered on our promises and exceeded our expectations by a very wide margin,” Trump told guests at the New York Hilton.

The president’s remarks were closely watched on Wall Street for any signals about the future of the U.S. economy, including prospects for a limited trade agreement with China or any indication he’s worried about a slowdown. Trump has built his case for re-election around the economy, which he says is enjoying its fifth year of uninterrupted expansion and near record-low unemployment thanks to his trade, tax and deregulation policies.

Trump reiterated his criticism of the Federal Reserve, which he has repeatedly blasted for not cutting interest rates sooner and more drastically.

When Trump got only a smattering of applause after praising negative interest rates in other countries, the president said: “Thank you, thank you -- only the smart people are clapping.”

Trump has frequently pointed to indicators including unemployment and stock-market highs to argue that he should not be impeached. The House will begin public hearings Wednesday in its probe of Trump’s effort to force Ukraine’s government to investigate his political rivals.

“How do you impeach a President who has created the greatest Economy in the history of our Country,” Trump tweeted on Sept. 28.

U.S. presidents and policy makers are regular speakers at the Economic Club, which draws its membership from major corporations, banks and investment companies, academia and other prominent nonprofits.

In a March 2008 speech to the group, President George W. Bush attempted to calm investors on the brink of the financial crisis by touting an emergency loan for Bear Stearns Cos. The investment bank ultimately collapsed and was sold to JP Morgan Chase & Co.

Markets have recently see-sawed in response to mixed messages from Washington and Beijing over how much tariffs would be lowered as part of a so-called “phase one” trade deal between the countries.

Trump said Saturday on Twitter that unspecified reports about the U.S.’s willingness to lift tariffs were “incorrect,” but added that talks with China are progressing “very nicely” and that leaders in Beijing want a deal “much more than I do.”