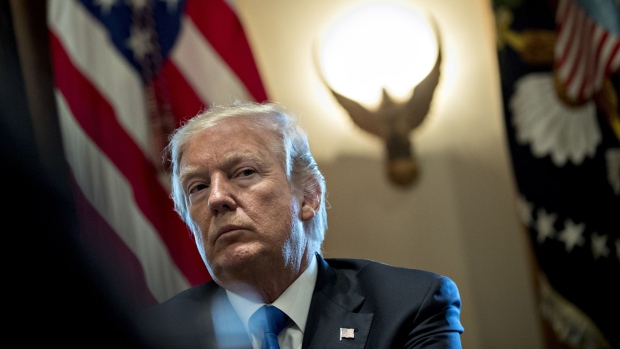 (Bloomberg) -- Donald Trump suffered an unprecedented public rebuke on Wednesday when the House of Representatives impeached him for a second time, clouding his prospects for a potential return to politics just days before he leaves the White House.

The 232-197 vote in the House offered a withering coda to Trump’s inglorious fall. Unable to manage the coronavirus pandemic and persuade voters to return him to the White House, the president instead inspired a violent and conspiracy-fueled attack on the seat of American democracy.

The backlash against Trump in the wake of the Jan. 6 insurrection at the Capitol has been swift, creating an unprecedented test of the vice-like grip he’s held on his party since his 2016 political ascendance. The Capitol riot the president helped incite sparked a wave of resignations across the administration, led to the president’s banishment from Twitter, and prompted corporate leaders to suspend donations to Republicans who peddled false allegations of widespread voter fraud.

The Senate now must hold its second impeachment trial of Trump, likely after he’s already left office. A post-presidential conviction could bar Trump from ever seeking federal office again.

While few Republican senators have said where they stand on the matter, the GOP leader, Kentucky’s Mitch McConnell, left open the possibility he’ll vote to convict in a letter to colleagues on Wednesday.

Regardless of the outcome, the events of the past week have shaken the pillars of American politics and point to a fraught road ahead for the Republican party.

Trump’s impeachment will undoubtedly cement his status as a martyr among his most loyal followers, who have cast the move as the latest effort by Washington to attack and undermine an outsider who threatened the status quo. But several Republicans, including Representatives Liz Cheney, Adam Kinzinger and John Katko, spoke out forcefully against Trump’s actions and voted to impeach.

“This is a vote of conscience,” Cheney said Wednesday. “It’s one where there are different views in our conference. But our nation is facing an unprecedented, since the Civil War, constitutional crisis. That’s what we need to be focused on.”

Some members of the party, though, tried to have it both ways. Loath to defend Trump’s actions, they instead argued that impeachment undermined Biden’s call for the country to unify in the aftermath of a presidency that has worn the nation thin.

Trump, for his part, has maintained the same vaguely threatening posture that helped foment the crisis in the first place. On Tuesday, he blamed the media and Democrats for “a continuation of the greatest witch hunt in the history of politics.”

He issued a statement Wednesday, as the House debated impeachment, that called for peace.

“In light of reports of more demonstrations, I urge that there must be NO violence, NO lawbreaking and NO vandalism of any kind,” he said. “That is not what I stand for, and it is not what America stands for.”

But the violent riot has tested the loyalty of some of Trump’s longtime enablers and allies. He alienated Mike Pence by tweeting that the vice president “didn’t have the courage” to illegally declare Trump the winner of an election he had lost, further inflaming his supporters before the riot.

Pence, in the Capitol at the time presiding over the congressional count of Electoral College votes, had to flee the mob with other lawmakers.

Several top administration officials canceled international travel or cut trips short this week out of concern that foreign adversaries might seek to exploit the U.S. political crisis and a White House under strain.

Trump’s attention will now turn to minimizing fallout from the impeachment vote on any possible second act in political life, while attempting to paint the consequences for his role instigating the riot as overblown and unfair.

His most immediate concern may be whipping support in the Senate, which needs a two-thirds vote to convict. More than a dozen Republicans would need to join Democrats to remove him from office. While Trump’s electoral loss and subsequent behavior has eroded his standing with many in the party, only one GOP senator -- Utah’s Mitt Romney -- voted to convict during Trump’s first impeachment trial less than a year ago.

Even out of office, Senate conviction would be more than an embarassment for the president. He would go down in history as the only president ever impeached and convicted, and senators could subsequently move to disqualify Trump from seeking federal office ever again, a measure requiring only a simple majority vote.

And fighting conviction could prove financially costly to Trump as well. Since he won’t be president, he won’t have a taxpayer-funded White House counsel’s office to defend him.

He already faces mounting financial pressure. New York Mayor Bill DeBlasio said the city will cancel some $17 million in contracts with the president’s company, Trump Org, including deals to operate skating rinks and a golf course. Stripe Inc. said earlier this week it would halt payment processing for Trump’s campaign.

And investigators for New York’s attorney general continue to examine Trump’s tax records and whether he broke the law by making hush-money payments to women who claimed he’d had affairs with them before his election.

Impeachment could also mean the loss of pensions for the president and first lady Melania Trump, as well as federal funds for a post-presidential office and staff, though legal opinions are split on the matter.

Separately, the president will try desperately to frame the impeachment effort within a broader narrative of persecution and grievance that he’s channeled throughout his presidency.

It worked before, when his approval ratings rebounded in the aftermath of the special counsel investigation into his campaign’s alleged ties with Russia, and after the Senate failed to convict him following his impeachment for pressuring Ukraine to launch an investigation into Biden and his son.

But Trump’s role in the riot -- which broke out shortly after he encouraged supporters to march to the Capitol and “fight much harder” against his political opponents -- is less complicated. Just 33% of Americans approved of Trump’s handling of his job in a Quinnipiac University poll released Monday.

And the mob scene at the Capitol only exacerbated perceptions Trump had become politically toxic. Not only was the president unable to win re-election, but GOP control of the Senate evaporated when two incumbent Republicans in Georgia lost despite the president campaigning on their behalf -- all before the chaos unfolded in the halls of Congress.

Trump will hope once again to defy expectations by operating outside the mainstream, though his options may prove dwindling. Fringe conservative cable channels have found themselves under threat of legal action for echoing the Trump campaign’s allegations about rigged voting machines, while Cumulus Media told conservative talk radio hosts to stop suggesting the election had been stolen, according to Inside Music Media.

And Trump’s role in the riot cost him his most important megaphone, his @realDonaldTrump Twitter account, now permanently suspended.

Trump has already said he is considering launching his own alternative social media network in the wake of his ban and on Wednesday sought to place his troubles with technology companies within a broader conservative narrative alleging discrimination and persecution.

“They shouldn’t be doing it,” Trump said. “But there’s always a counter move when they do that.”