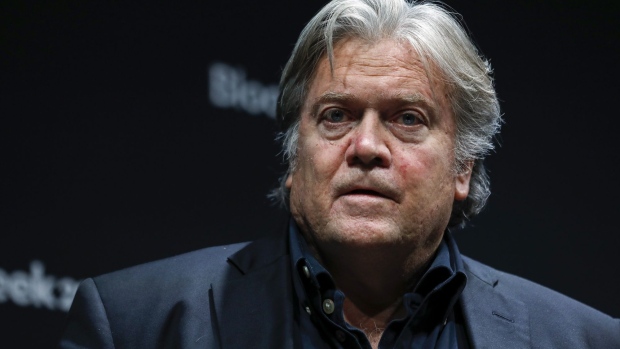 (Bloomberg) -- President Donald Trump has repeatedly spoken by phone with Steve Bannon in recent weeks to seek advice on his campaign to overturn his re-election defeat, reconciling with his once-estranged former White House strategist, according to people familiar with the matter.

One person familiar with the matter said the president has sought out allies who would tell him what he wants to hear as he promulgated false claims that the election was stolen from him.

It isn’t clear how many times the men have spoken or how recently. But Bannon has made considerable efforts to get back in Trump’s good graces since he departed as the president’s chief strategist in August 2017 and cooperated with Special Counsel Robert Mueller’s Russia investigation.

During Trump’s first impeachment in 2019 and 2020, Bannon launched a podcast called “War Room” in which he and other Trump allies publicly defended the president. Bannon used his podcast to support Trump’s widely criticized response to the pandemic, to advocate for the president’s re-election and then to back the president’s claims the outcome was fraudulent after he was defeated by Joe Biden.

Bannon could not be reached for comment. White House spokespeople didn’t respond to requests for comment. The people familiar with the matter asked not to be identified because conversations between Bannon and Trump have been private.

Bannon faces federal criminal charges for his involvement with a private nonprofit that raised money to build a wall on the U.S. border with Mexico. Prosecutors allege Bannon and other people associated with the project pilfered donations for their personal use. Bannon has denied the charges.

Trump, as president, has unchecked pardon power for federal crimes.