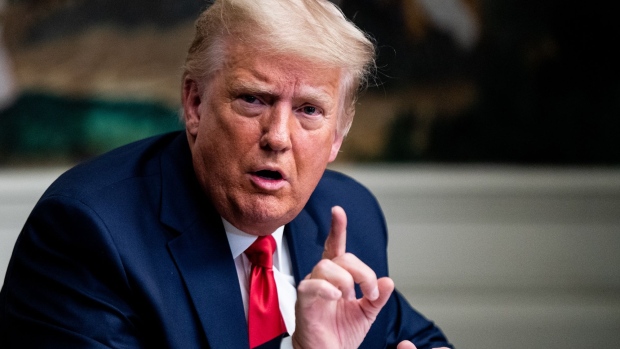 (Bloomberg) -- Donald Trump’s deposition in a long-running class-action fraud suit was set for Friday at Mar-a-Lago, but the tightly guarded date wasn’t made public until lawyers from both sides engaged in a war of words about Hurricane Ian.

Roberta Kaplan, the investors’ lawyer, wrote to a New York federal judge Wednesday seeking a delay, saying she could not get Trump’s attorneys to agree to reschedule the deposition or move it from the former president’s Florida residence to his golf club in Bedminster, New Jersey, due to the storm.

“We do not believe that is prudent or safe, and we have been unable to obtain defendants’ agreement to reschedule (or relocate) the deposition,” wrote Kaplan, who planned to fly to Florida Thursday morning. “The last we heard is that Defendants insist the deposition go forward at Mar-a-Lago and on Friday.”

Trump’s lawyers, who had already flown to Florida for the deposition, responded in a blistering letter of their own, saying Kaplan’s filing was “riddled with disingenuous and misleading statements” and criticizing her “hasty request” to cancel the deposition even after one of her partners had assured them as recently as Tuesday that they planned to travel.

“We thought it absolutely absurd to travel from the New York area to West Palm Beach in the middle of a hurricane and would have been pleased to reschedule the deposition to another date, but plaintiffs insisted that it proceed,” Clifford S. Robert, a lawyer for Trump, wrote in a letter to the court last night.

But Kaplan said in her letter that she was “walloped” when she heard Trump’s lawyers went ahead with their flights to Florida.

Late on Wednesday, US Magistrate Judge Sarah Cave ordered the two sides to agree on a new date for the deposition, adding it must be held before Oct. 31. Hurricane Ian was “battering the Florida peninsula with catastrophic storm surge, winds, and flooding,” the judge wrote, citing the National Hurricane Center.

“Under these conditions, whether the deposition could occur on Friday, even remotely, is uncertain,” Cave said.

Hurricane Ian made landfall near Fort Myers, Florida, Wednesday afternoon resulting in extensive damage from high winds, and causing widespread flooding and power outages. “This is going to be a tragic event,” Florida Governor Ron DeSantis said during a briefing as the storm approached.

Trump, his company and his three oldest children were sued in 2018 by four investors who claim they were duped into paying thousands of dollars to become independent sellers with ACN Opportunity LLC, which sold a doomed videophone device that the Trumps touted as the next big thing but which was rendered obsolete by smartphones.

Trump fought for years to avoid the deposition but ultimately agreed earlier this year to answer questions under oath, after his attempt to dismiss the suit failed. The case is one of the lesser known legal disputes facing the former president as he weighs a possible 2024 run for the White House.

According to the suit, the Trumps, who promoted ACN on “Celebrity Apprentice,” lied about their faith in its products and also failed to disclose they were being paid to promote the company. Trump himself also starred in promotional videos and appeared in-person at events for the company.

He told recruits that the “tremendous” phones, which required ACN internet service to work, were doing “half-a-billion dollars’ worth of sales a year,” and that ACN was “at the forefront of innovation,” according to the complaint. The plaintiffs argue those claims were “abjectly false.”

Before the judge ordered the deposition rescheduled, Trump’s lawyers proposed holding the testimony by Zoom, “for the safety and security of all parties.” Kaplan rejected the proposal in a follow-up letter.

“We have more than 70 documents and 20 video clips we plan to or may use,” she told the judge, adding that made a deposition by Zoom unworkable.