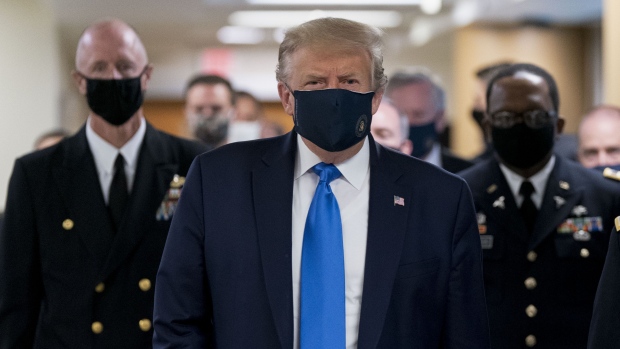 The mask may have reached a tipping point.

The president, who for months resisted covering his face in public, tweeted that “it is Patriotic to wear a face mask when you can’t socially distance.” And Vice President Mike Pence told governors in a teleconference that he supported their mask mandates, with the administration even sending a memorandum to New Jersey recommending that it continue its order. The reversal followed polls that showed Trump’s refusal to champion masks was out of step with citizens terrified by rising case counts nationwide.

It also comes as Republican governors, facing outbreaks spiraling beyond control, begin to break with Trump on the issue. Texas Governor Greg Abbott last week cast masks as key to ensuring the state wouldn’t need to shut down its economy a second time, though he resisted ordering their use. Mississippi Governor Tate Reeves on Monday required residents of 23 hard-hit counties to start wearing masks.

“We have to take COVID-19 seriously,” Reeves said at a news conference. “This virus is not going away. There are lives on the line.”

Coronavirus cases in the U.S. increased Monday to 3.79 million, according to data collected by Johns Hopkins University and Bloomberg. The disease has killed almost 141,000 Americans so far.

The administration’s refusal to formulate a national plan to fight the virus has become a major hurdle to Trump’s re-election, and the president said Monday he would resume regular Covid-19 briefings. Pence told governors in the teleconference that the administration would support the mask orders, according to a person who heard the call. He also suggested that bars be closed in states or regions with high virus spread, according to Kentucky Governor Andy Beshear.

And in the afternoon, Trump sent the tweet showing himself in a mask with the presidential seal. “There is nobody more Patriotic than me, your favorite President!” he wrote.

Cloth masks don’t guarantee protection from the virus. But they do help block droplets of water vapor, carried on breath, from spreading far beyond the face. If people are infected with the coronavirus but don’t know it, a mask can help prevent them from infecting those around them.

Trump has appeared in public in a mask only once, on a visit to a military hospital, and he gave no indication Monday that he would wear one regularly. The White House didn’t respond to a request for comment.

Trump’s tweet muddled what had become a bitter partisan debate. He had shunned masks, and many supporters said mandating them infringed on their rights. Trump initially argued for a mask-free Republican convention, and there were anti-mask demonstrations and videos of ugly confrontations in stores.

But Trump’s new stance could put mask mandates in the same category as laws about seat belts, motorcycle helmets or secondhand smoke -- safety measures that, while unpopular at first, eventually won acceptance.

Researchers who have studied such shifts in public opinion say the identity of the people urging change can make a difference.

“If you have the person in charge of the country saying, ‘It’s up to you -- I’m not going to wear one,’ that’s really problematic,”’ said Catherine Sanderson, chair of the psychology department at Amherst College in Massachusetts and author of “Why We Act: Turning Bystanders into Moral Rebels.”

Major social changes can be triggered even if just 25% of the population adopts them at first, she said. But it has to be the right 25% -- people with genuine influence. Governors can qualify. So can presidents.

“If Trump had done this two months ago, more people would have lived,” Sanderson said Monday, after Trump’s tweet. “But this is better late than never, especially if it gives GOP governors tacit permission to require masks in their red states.”

Some of America’s largest retailers -- Walmart Inc., Target Corp. and CVS Health Corp.-- are now requiring all shoppers nationwide to wear one, whether local officials mandate them or not. And the number of states, counties and cities ordering the use of masks in public is growing, albeit not without a fight. One example: the ongoing dispute between Louisiana’s attorney general, who says statewide mask orders are unconstitutional, and the same state’s governor, who insists they aren’t.

During the AIDS crisis, efforts to shame people into wearing condoms or abstaining from sex didn’t work. Messages that offered condoms as a way to keep having sex without hurting yourself or others did.

“If we just yell at people about not wearing masks, we’re not going to get anywhere,” Marcus said.

Polls show that large majorities of Americans support wearing masks in public, although there are deep divisions along partisan lines. Public-health experts say immediate action is needed to fight the pandemic, but similar societal shifts evolved over decades.

“It took a long time to regulate smoking, to get to that point,” said Jay Van Bavel, associate professor of psychology and director of the Social Perception and Evaluation Lab at New York University. “And we don’t have that kind of time.”

The campaign to convince Americans to wear masks, however, shares one successful element with anti-smoking efforts: It is as much about protecting other people as protecting oneself. Public understanding of the dangers of secondhand smoke, Van Bavel said, was key to the acceptance of smoking bans on planes and in restaurants.

“It directly addressed those concerns around personal liberty and reframed masks as a ticket to freedom,” Marcus said.

--With assistance from Justin Sink, Alexander Ebert and Jennifer Kay.