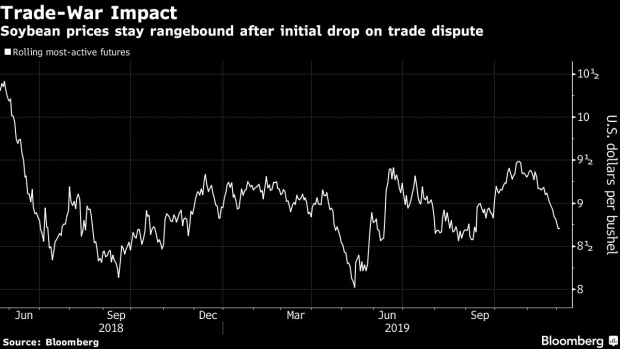 (Bloomberg) -- President Donald Trump’s $28 billion farm bailout may be paying many growers more than the trade war with China has cost them.

The U.S. Department of Agriculture’s calculations overshot the impact of the trade conflict on American soybean prices, according to six academic studies, a conclusion that is likely to add to criticism that the bailout has generated distortions and inequalities in the farm economy.

“It’s clear that the payment rates overstated the damage suffered by soybean growers,” said Joseph Glauber, the USDA’s former chief economist who published a review of the research in late November. “Based on what the studies show, the damages were about half that.”

The academic research has focused on soybeans in part because the crop has been the most visible target of Chinese retaliation and overall received the most trade aid. But the method the department used to calculate trade losses also likely overstates the conflict’s financial impact on most other farm products, though for a few commodities it may understate the true impact, Glauber, now a senior fellow at the International Food Policy Research Institute, said in an interview.

The divergence doesn’t necessarily mean a bonanza for American farmers, who are being financially squeezed on other fronts, including a global commodity glut that is depressing prices and a year of wild weather that is damaging crop yields. Also, the trade conflict risks long-term loss of market share for U.S. producers as overseas customers build relationships with replacement suppliers. Neither the academic nor the USDA estimates take potential future market losses into account.

“You’re ruining a huge export market,” said Yuqing Zheng, an agricultural economist at the University of Kentucky. “Longer term, we don’t know for sure what the impact will be. Even if there is no future tariff, China might import less from the United States.”

Still, a team led by Zheng estimated the trade conflict depressed U.S. soybean prices by only 36 cents per bushel in its first year, a period in which the bailout program paid soybean growers more than four times that: $1.65 per bushel.

The scale of the farm rescue package has now swelled to more than twice the ultimate $12 billion cost of the controversial auto industry bailouts under Presidents George W. Bush and Barack Obama. And it’s increasingly come under under fire.

Senate Democrats issued a report in November arguing the trade aid program favors large producers over smaller ones. An advocacy group, the Environmental Working Group, released a study that asserted big farms so far have been the main beneficiaries of the billions of dollars in aid payments.

The USDA forecast last week net farm income will rise more than 10% this year to $92.5 billion, with additional government aid accounting for all of the increase in profits. Almost 40% of projected U.S. farm profits this year will come from trade aid, disaster assistance, federal subsidies and insurance payments. With the extra aid, farmers will have their highest profits in six years, though still well below the $124 billion they netted in 2013, according to the department.

The trade aid, particularly for soybeans, largely goes to the president’s political supporters. Polls show Trump has maintained overwhelming backing from farmers. In the 2016 election, Trump won eight of the 10 states with the largest soybean acreage, all of them in the Midwest. Glauber estimates more than half of the direct payments under the USDA’s market facilitation program cover soybeans.

The apparent over-payment stems from the method the USDA used to compute trade damages for the rescue package. The department forecast the overall price impact of punitive tariffs China and other nations imposed on U.S. farm products without considering sales farmers would gain as the world market reorganized in response. But as China bought more soybeans from Brazil, instead of the U.S., other buyers stepped in to purchase more soybeans from the U.S., replacing product they had previously bought from Brazil.

“A broader analysis like some of these show the beans go elsewhere,” Glauber said. “They don’t just go into storage. Some of them go to Europe. Some of them go to other uses. We ended up crushing a lot more soybeans in 2018 than expected. We exported more vegetable oil, more protein meal. All of that mitigates the price impact.”

Pat Westhoff, director of the University of Missouri’s Food and Agricultural Policy Research Institute, led a team that estimated tariffs from China and other nations involved in trade disputes caused the price of U.S. soybeans to drop by 78 cents per bushel.

The USDA projections “do not consider the impact of exports to other markets,” Westhoff said. “They consider only the negatives and not the positives.”

Michael Adjemian, an economist at the University of Georgia, came up with a lower impact: 52 cents a bushel. He based his model on the export price for soybeans in New Orleans.

“New markets emerged,” Adjemian said. “We sold more to the rest of the world, though not enough to make up all of the difference.”

Robert Johannson, the USDA’s chief economist, said the department decided to base trade aid on a projection of “gross” trade losses rather “net” losses primarily for consistent treatment of producers of diverse farm products affected. It’s harder to isolate net trade impact for specialty crops such as pecans or almonds than for major commodities such as soybeans, he said.

“We need to be pretty sure whatever method we use is consistent across all commodities,” Johannson said. “You can imagine what the reaction would be if we said we’ll use this model for soybeans and that model for sorghum and another one for cotton.”

USDA officials also concluded after consulting with U.S. trade negotiators that there was an advantage to using the gross damages method because it is the basis the country uses for arguing cases before the World Trade Organization, which handles international trade disputes, Johannson said.

Individual producers also may face greater losses than the overall net price impact of the trade war depending on their location because there may be higher transportation costs for moving their goods to a different market or other adjustment costs, he added.

In some cases, though, the method the USDA uses to compute trade aid may understate losses to farmers. Westhoff cited corn growers. The gross trade losses cover only the direct impact of the tariff dispute. Corn growers have primarily been hurt by indirect effects as farmers who might otherwise grow soybeans produce corn instead, bringing down corn prices, he said.

The USDA has made a higher trade damage estimate for soybeans in this year’s aid program, at $2.05 per bushel, which Westhoff said also exceeds his group’s estimate for the impact in the period.

This year’s payment is higher because the USDA decided to calculate the damage based on export sales over the past 10 years; last year’s payment was based on a comparison with the prior year.

Wendy Brannen, a spokeswoman for the American Soybean Association, declined to comment.

To contact the reporter on this story: Mike Dorning in Washington at mdorning@bloomberg.net

To contact the editors responsible for this story: Joe Sobczyk at jsobczyk@bloomberg.net, Millie Munshi