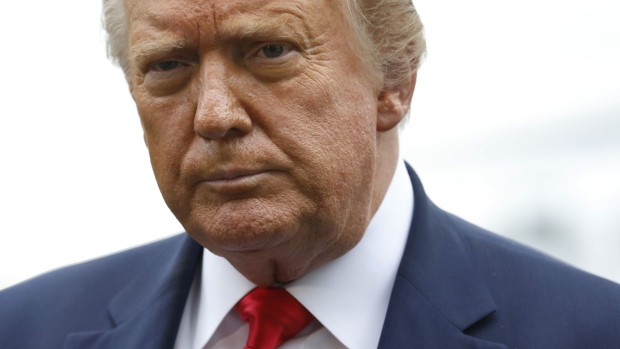 (Bloomberg) -- The day after Donald Trump effectively gave up his court fight over government documents seized by the FBI from his Mar-a-Lago home, his lawyers were in a Washington courthouse amid reports the Justice Department has asked for the former president to be held in contempt in connection with the records probe.

None of the attorneys – Evan Corcoran, Jim Trusty, and Tim Parlatore – would say why they were in court Friday. Corcoran, Trusty, and Parlatore met up in the courthouse cafeteria before the lawyers walked up to an office suite where US District Chief Judge Beryl Howell has her chambers shortly before 2 p.m. and were let in. That area is not open to the public.

An hour and a half later, the trio was spotted leaving the courthouse by a CBS cameraperson; they did not exit via the public hallway where reporters were waiting and didn’t make a statement outside. It was not immediately clear if a government lawyer was part of the proceeding. Justice Department spokesperson Myron Marlin declined to comment.

Court spokesperson Lisa Klem acknowledged the proceeding but provided no details about the outcome. “This afternoon, the court held a hearing regarding an ongoing and sealed grand jury matter,” she said. “This matter remains under seal.”

The Justice Department has asked to hold Trump in contempt for failing to comply with a May grand jury subpoena for any classified material in his possession, according to the Washington Post. CNN reported that at a hearing Friday afternoon, Howell will consider contempt proceedings against Trump and his office for not fully complying with the subpoena. The proceedings are under seal.

Although grand jury matters typically are secret, an unusual amount of information has become public about the federal criminal investigation into the handling of government records once Trump left the White House, including his attorneys’ initial responses to the grand jury subpoena and the seizure of records from Mar-a-Lago Aug. 8 pursuant to a search warrant.

Federal Bureau of Investigation agents reported seizing thousands of documents and other items from several areas within Mar-a-Lago, including about 100 records with classified markings.

Judges have ordered a range of documents unsealed – wholly or partially – related to the probe and the search of Mar-a-Lago in August. Howell signed off on the public release of a lightly redacted set of documents that included a copy of the May 11 grand jury subpoena as well as correspondence between Trump attorneys and the Justice Department confirming the subpoena had been received.

A coalition of more than a dozen media outlets, including Bloomberg News, sent a request to Howell on Friday requesting access to the proceeding before the Trump lawyers went into her chambers suite. The judge did not immediately respond to that letter and had not responded by the time the attorneys left the courthouse.

Several news outlets have separately asked to unseal documents related to an apparent separate grand jury exploring the events surrounding the Jan. 6 attack on the US Capitol. That matter is also before Howell, who has yet to rule.